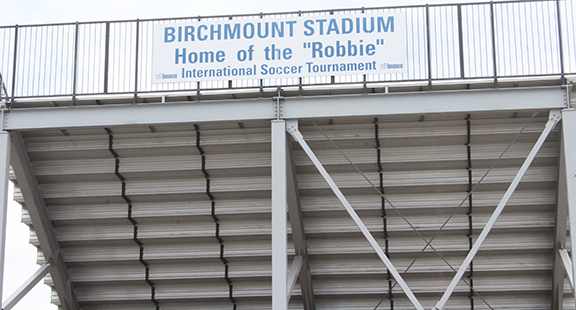 Championship Day action in this weekend's Robbie Tournament is set for Monday, July 1 at Birchmount Stadium -- Home of The Robbie.

Soccer fans are invited to take in some top-level youth competition this weekend as the 53rd annual Robbie International Soccer Tournament prepares to host numerous games at local fields and stadiums.

The Robbie has been around since 1967 and this weekend’s tournament will see approximately 150 teams competing in boys and girls divisions.

Locally, fans can see the Under-17/18 boys in action at both Monarch Park Stadium (1 Parkmount Dr.) and at the Cherry Beach fields (47 Unwin Ave.).

Round-robin games are tentatively set to go from approximately 8:30 a.m. to 4 p.m. on June 29 and June 30 at Monarch Park and Cherry Beach, but please check the website at www.robbie.ca for final schedules.

Championship Day for The Robbie is Monday, July 1 with a number of games set for Birchmount Stadium at Kingston and Birchmount roads in Scarborough.

The Robbie is the largest youth soccer tournament for charity in the world. Last weekend (June 22 and 23) approximately 250 boys and girls teams (ranging in age from Under-8 to Under-12) took part in the Robbie Festival. Principal sponsor of the Robbie Festival is Toronto FC.

Teams from across Ontario, as well as Quebec, Alberta, New York, New Jersey, Vermont and even Barbados will be taking part in this year’s Robbie Tournament.