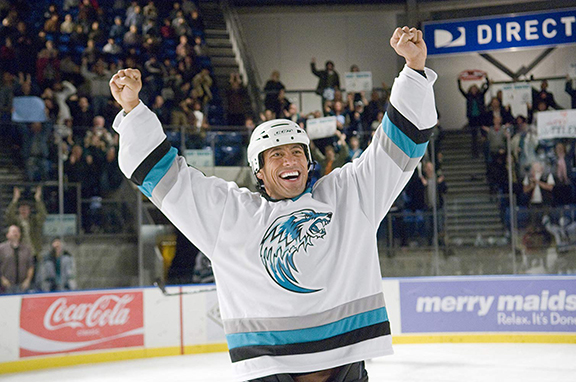 Dwayne Johnson in Tooth Fairy. He can trace his family roots back to Nova Scotia and southwest Scarborough.

Some dads receive a tie on Father’s Day, but Rocky Johnson was given a new home by his actor son Dwayne Johnson.

Hey, the Rock can afford it.

Did you know the king of summer action flicks is proud of his Canadian roots, eh? His grandmother and uncle even lived in our area.

Human history is a tale of migration.

What events shaped our destiny? Where does our family come from? How did we get here?

Ancestry searches are becoming quite popular. If you are a fan of shows like Who Do You Think You Are? and Finding Your Roots, you’ll know how complicated family histories can be.

Every family tree has some odd branches and bad apples. Each generation has a story to tell. Some are even true.

What if Elias Disney (1859-1941) had stayed on the farm in the tiny Ontario village of Bluevale instead of wandering all over North America?

He was a stern father and didn’t think much of his son’s career choice as an artist. How did that work out for Walt Disney?

Imagine if Alexander Graham Bell had stayed in Scotland instead of moving to Brantford, Ontario with his parents?

Oscar-winning actor Walter Huston could have stayed in Toronto, but he had big dreams and his son, John, gave us great films like The Maltese Falcon and The Treasure of the Sierra Madre.

Creative sons often have demanding or difficult fathers in the same way an oyster needs an irritant, a grain of sand, to create a pearl.

Dwayne Johnson is glad now that his father pushed him to train hard.

Rocky’s career as a pro wrestler may be coming to the big screen. A biopic called Ring King is in the works from Toronto producers. It’s too bad the title Rocky is already taken because this is a true hard knocks life story.

Rocky was born Wayde Douglas Bowles in 1944 in Amherst, Nova Scotia, the sixth generation African-Canadian descendant of James Bowles who fought on the side of the British in the Carolinas during the American Revolutionary War (1775-1783).

Some 3,000 Black Loyalists were promised freedom and land in return for helping the British. Bowles is listed in the historical document The Book of Negroes which became the title of Lawrence Hill’s fine 2007 novel and a moving CBC TV mini-series in 2015.

James Bowles departed from New York in 1783 on a ship bound for the colony of Nova Scotia. The Bowles family worked hard, but life wasn’t easy.

He was a huge man, 6’7” and 270 pounds, considered to be the strongest man in Nova Scotia. Legend has it he lifted a church bell which weighed almost 500 pounds.

In the 1950s the marriage of James and Lillian broke down.

These were difficult times in Nova Scotia with the Springhill mine disasters. Maritimers were “goin’ down the road” to the big city. By 1957 the Bowles family had moved to Toronto where James found work as a truck driver.

In the 1960s and early 1970s, Lillian Bowles lived in an apartment building on North Drive in the Kingston Road and Victoria Park Avenue area.

Young Wayde also worked as a truck driver and then tried boxing and wrestling. He was even a sparring partner for Muhammad Ali.

Around 1964 he changed his name and went on to become a star wrestler, winning tag team championships as Rocky “Soulman” Johnson.

His son, Dwayne, was born in California in 1972. Rocky now resides in Florida, but many Bowles family members still live in the Toronto area.