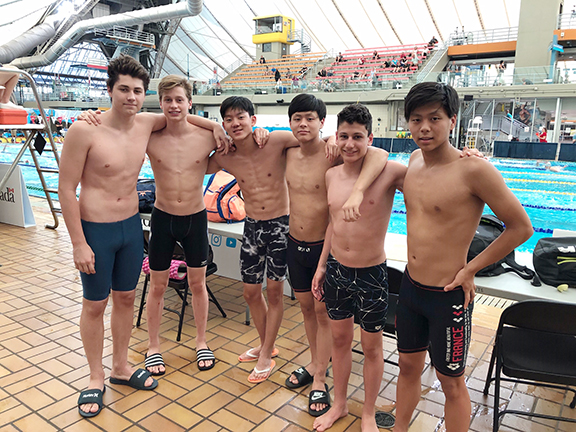 Crest Swimming, which is based out of the Crescent Town Community Pool, recently won the Swim Ontario Small Team Award at the Summer Ontario Swimming Championships.

Six members of the club also put in strong performances at the Canadian Junior Nationals meet held in Calgary at the end of July.

At the Ontario championships, held at the Toronto Pan Am Sports Centre in Scarborough at the end of June, Crest won the Small Team Award which is presented to a team of 50 or fewer swimmers which earn the most points by placing in the top eight spots in competition events.

The Crest team trains at the Crescent Town Community Pool near Victoria Park and Danforth Avenue and is primarily made up of east-end swimmers with ages ranging from eight to 18.

They won five medals and finished eighth overall for boys’ teams at the meet.

Loewen, competing in the 14-15-year-old division, overcame illness to win gold in the 100-metre butterfly with a personal best time of 57.12; a silver in the 200m backstroke and 400m individual medley; and a bronze in the 200m fly.

On the final night of the nationals in Calgary, three Crest swimmers were in the B final of the 14-15-year-old 50m freestyle with Prokosch winning the race to finish ninth overall.

“Crest has had another exceptional year in and out of the pool,” said Wilfred Arzaga, Head Coach for Crest Swimming, in a release.

“Crest is a small team by design as we believe in a personal training experience for our swimmers and the small team environment ensures that all swimmers receive training and support to achieve their goals.”

Crest Swimming began in 1981 and the club has 48 competitive swimmers.

Programs are managed by Arzaga and Development Coach Che Mineque.