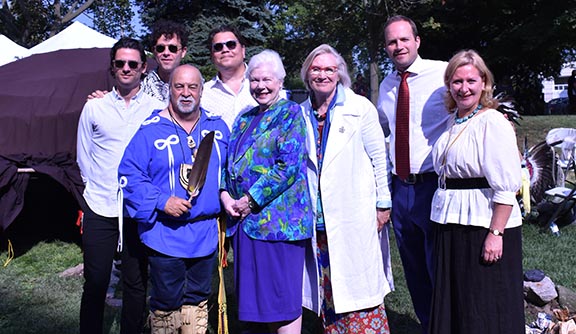 The Bear’s Den All Nations Traditional Medicine Sweat Lodge was officially opened on the grounds of the Michael Garron Hospital in East York after a formal ceremony on Tuesday, Aug. 13.

The event was hosted by Michael Garron Hospital Toronto East Health Network and members of The Aboriginal Healing Program.

Community members of The Aboriginal Healing Program built the sweat lodge under the guidance of Elder Little Brown Bear.

“I’m very blessed and very honoured to be able to do what I do with the Michael Garron family and community members. The sweat lodge marks a milestone—it’s history for us in the making that people will be able to come and they will be able to heal,” said Elder Little Brown Bear.

The event began with songs from Georgian Bay Singers and Ogichidaa Kwe (Warrior Woman), followed by a welcome and land recognition from Sarah Downey, the president and CEO of MGH.

Downey called the sweat lodge “a safe, sacred, and confidential space for anyone seeking healing and spiritual cleansing.

“There are many people who will benefit from the sweat lodge and the teachings of our Elder: our diverse patients seeking spiritual healing; our staff, physicians, and volunteers whose line of work and personal lives can cause harm; and Aboriginal community members who have understood for generations the powers of these therapies,” said Downey.

Elder Little Brown Bear, manager of Aboriginal Culture at MGH, then gave a blessing at the opening ceremony, followed by an address from Carolyn Bennett, Minister of Crown-Indigenous Relations, and then Gary LaRocca (for Chief Kelly LaRocca) gave greetings on behalf of the Mississaugas of Scugog Island First Nation.

“So often in my work, in our work, we see that people only get in touch with their culture in prison or terrible situations. And then here you are at Michael Garron Hospital where you are actually able to help people on their healing journey to do what in medical school we never learned,” said Bennett.

The Arkells were honoured for creating space for Aboriginal singer-songwriter Jeremy Dutcher at this year’s JUNO awards. Dutcher’s acceptance speech about reconciliation was cut off, and when Arkells won Rock Album of the Year, they invited Dutcher back onstage to use their speech time.

“We feel like we’re getting way too much credit for what we did. We really are just curious people and Jeremy had so much wisdom to share. We didn’t. We were just really excited to hear him finish the speech,” said Kerman.

The sweat lodge is four metres in diameter, and its frame is made from flexible saplings fashioned into a dome shape.

According to the media advisory from MGH, “participants sit on the ground encircling the sacred pit to concentrate on the spirits invited to the ceremony and brought in with the ‘grandfathers’. The entrance faces east creating an umbilical cord between the sacred fire and Eastern Doorway. The stones are heated in the fire by the fire keeper. Medicinal cedar water is poured over the grandfathers in the sacred healing pit at the centre.”

“As a settler, it’s important to think about reconciliation with our Aboriginal peoples and what each of us will do to acknowledge and understand our history and the impact of our history on them,” said Downey.

Downey said that the construction of the sweat lodge is a signal of this, and that the hospital treats many Aboriginal people who may not feel safe identifying themselves as Aboriginal, or visibly show their traditions and practices.

“What we do might be easier for them to come forward for help and treatment in a variety of ways,” said Downey.

She said that the other important thing to note is the sweat lodge is open to anyone looking for healing.

“It’s also a symbol to the community of sweating and the value of sweats and the importance of healing everybody’s spirit.”

MGH is currently undergoing a massive redevelopment project, the largest in the hospital’s history since it opened in 1929. The redevelopment will see the opening of a sacred medicine garden as well as an All Nations smudging room.

There are also plans to construct a Tipi for traditional teachings close to the sweat lodge.