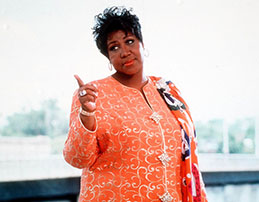 Aretha Franklin in a scene from the Blues Brothers 2000 which was shot at a car dealership at Dundas Street East and the Don Valley Parkway.

Summertime and the livin’ is easy for music lovers. Maybe the fish aren’t jumpin’, but the bands sure are.

Whatever your musical taste you can find your groove at music festivals.

Summer kicked off on June 22 with the 50th anniversary celebration of the Legendary Downchild Blues Band at the Toronto Jazz Festival.

If a rollicking blues band is putting on a party, who ya gonna call?  No, not a Ghostbuster, but a Blues Brother.

I was walking along Bloor Street when who popped out of a building but Elwood Blues himself, Dan Aykroyd, dressed all in black with the cool hat and shades. Fellow Canuck and bandleader Paul Shaffer came over and gave Aykroyd a big hug.

The two go back a long way to the early days of Saturday Night Live.

Aykroyd came to Toronto in 1969 from Ottawa and Kingston and became a member of the Second City Comedy troupe.  He’s been a movie star in Hollywood for decades, but he still comes back home on Canada Day, his birthday. His grandfather was even a Mountie!

Aykroyd has said, “There would be no Blues Brothers if it wasn’t for Downchild”.

He credits siblings Donnie Walsh and the late Richard “Hock” Walsh as the inspiration for the Blues Brothers which started as a skit on SNL and led to platinum-selling albums and a hit movie in 1980. Aykroyd and John Belushi modelled their characters on the Walsh brothers.

The idea came one night at Aykroyd’s after hours club at 505 Queen St. E. Belushi was there and heard Downchild’s album playing. Aykroyd told him it was a local blues band. Music director Howard Shore called Aykroyd and Belushi the Blues Brothers and the name stuck.

The 1980 Blues Brothers film became a cult classic. The sequel Blues Brothers 2000 (1998) was a flop, but showcases some terrific performances from legends like Aretha Franklin and B.B. King.

In one scene Aykroyd and John Goodman take on Russian mobsters at St. John’s Norway Cemetery.

One highlight is Franklin singing Respect at the Mercedes dealership on Dundas Street East overlooking the Don Valley. The two Blues Brothers films were the Queen of Soul’s only acting roles.  The world lost a legend on Aug. 16, 2018 when Franklin died.

Aykroyd paid tribute to her in a tweet: “Happy memories of being with Aretha on movie sets and industry events. The Queen had a wry, skeptical eye on the world but once you got her laughing you were in. What a voice! What a soul!”

Recent movies like Aretha’s 1972 concert film, Amazing Grace, Bohemian Rhapsody, Rocketman and Yesterday tap into our nostalgia for the great music we grew up listening to. Can you believe that Mick Jagger of The Rolling Stones is turning 76 and Woodstock was 50 years ago?

It was like old times last month when Aykroyd and Shaffer joined Downchild on Bloor Street for rousing renditions of Flip, Flop and Fly, Soul Man and I Got Everything I Need (Almost).