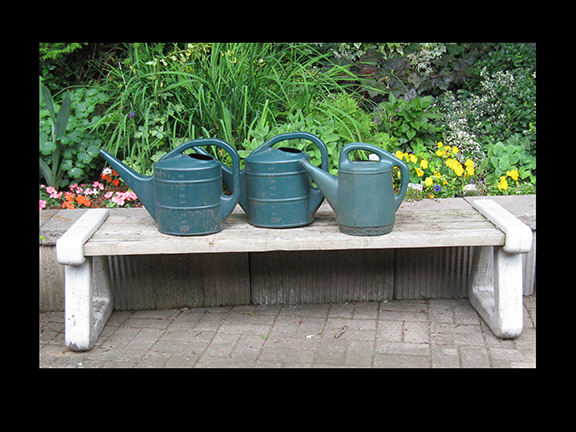 Watering is one of the key 3Ws for gardening in August.

The month of August is a sort of Bermuda Triangle for gardeners.

It’s sunny and hot, too early to plant bulbs and put the garden to bed; too late to start anything much from seed; too hot to put in new plants. It’s a time to lie around on porch or patio, drinking lemonade (or something stronger) and fanning yourself lazily.

But even if you’re lazing around in a late-summer daze, crawl out of your Muskoka chair at least a few hours a week for the essential 3 W’s of the season: whacking, weeding and watering.

Whacking. Dainty gardeners prune. The rest of us whack back.

We’re still careful how we cut, but we often do a lot of clipping in a burst of energy.

August is a good time for this, because shrubs are already winding down for the winter – which means most won’t be tempted to sprout new foliage when they’re cut back.

Many of our lush, leafy shrubs are being a little bratty just now. That’s another reason to cut them back.

My glorious Bridalwreath spirea, for example, is a breathtaking ball of white in late spring/early summer.

At this point, though, it’s become a boring green giant the size of a baby elephant. Time for pruning shears and maybe even loppers.

Another pesky summer layabout is my forsythia.

I should probably note that Really Good Gardeners prune their forsythias right after they bloom in spring. That’s because all summer long, the leafy branches have been busy making next year’s flower buds.

If you cut the plants back heavily in August or later, you’re cutting off those future flowers.

But my forsythia is determined to spread its branches into the space over my steps. Even covered with flowers, that would be a nuisance, so they’re coming off ASAP.
In fact, the coming weeks are a good opportunity to whack back anything that blocks sidewalks and paths.

Only cut what’s absolutely necessary, though, or you could wreck that spring bloom.

Watering. Do I really need to say more?

You can have an OK garden if you don‘t water much, but to get the Wow! factor, you have to water regularly.

Even plants that like dry soil perk up after a good drenching in August.

All newly planted things, especially trees, need a deep watering at least a couple of times a week.

The huge oaks and maples that bless many Beach gardens are competing for water with everything else we plant. And the sand that lies under even the best gardens drains moisture away incredibly quickly.

You keep yourself hydrated in August heat, so hydrate your plants, too. (Bonus: it’s easier to pull weeds out of damp soil.)

Weeding. Some people say weeds are just plants growing in the wrong place, but I don’t agree.

Weeds are greedy bullies. Give most of them an inch, and they’ll take over your yard.

Crabgrass is like that and so is the deceptively pretty creeping (or creepy, as a friend calls it) bellflower, AKA Campanula rapunculoides.
Some weeds are even harmful to humans and other animals.

Burdock is another weed I consider a pest. Sure, you can eat the leaves – if they’re small, if you boil them for a while and if you really want to. But the grown-up plants are covered with hateful burrs that attach themselves to anything – including your dog’s fur – and they’re no fun to get rid of.

Weeds are always with us, so August is a fine time to yank them out and throw the really evil ones away before they get a chance to go to seed.