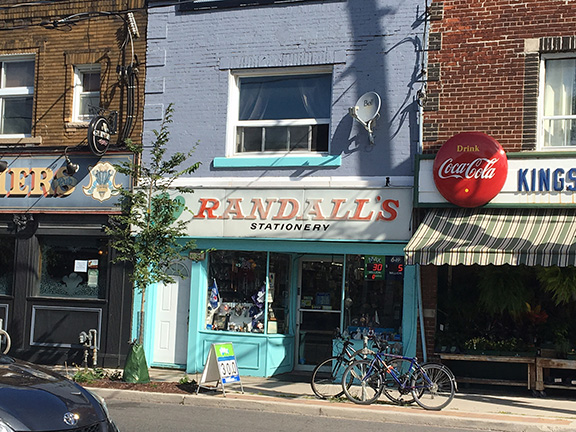 The site of Randall's Stationery on Kingston Road is one of the locations to awarded a cannabis retail store licence in the latest provincial government lottery for the licences.

September will mark the end of an era in the Beach as the store building has been sold and the family that has been running Randall’s Stationery since 2003 will no longer be operating it.

And to make the change in what has been an area institution since 1934 and a go-to for school supplies for generations of students even more profound, the store itself at 964 Kingston Rd. could end up as a cannabis retail outlet.

The address is one of the listed winners for the Alcohol and Gaming Commission of Ontario’s second lottery for retail cannabis store licences. The ownership of the licence is under the name of Najla Guthrie, according to the AGCO’s website.

Members of the Randall family have not actually owned the store since 2003, though it continued under that name given its long tradition in the community.

Another cannabis retail licence winner in the second AGCO lottery was Jason Krulicki, at 2480-2490 Gerrard St. E., which is in the shopping plaza on the northeast corner of Victoria Park Avenue.

That address was the source of much controversy when it was suggested as the Ontario Cannabis Store’s first location in April of 2018.

The provincially-run Ontario Cannabis Store plan for distribution of cannabis was introduced under the previous Liberal government of Kathleen Wynne. When the Doug Ford Conservatives were elected to power in June of 2018 they scrapped the Ontario Cannabis Store plans, and introduced a private retail system in which licences to sell cannabis would be awarded by lottery.