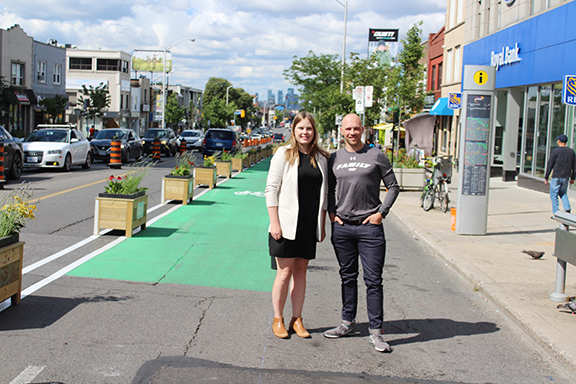 As finishing touches were being put on the streetscape along Danforth Avenue for the 8 80 Streets Danforth pedestrian safety pop up installation this morning, which reduces the street to one lane each way for traffic between Woodbine and Woodmount avenues on Aug. 23 and 24, most people seemed happy with the transformation taking place but at least one driver was clearly not supportive.

The driver of a blue Ford Econoline van showed his displeasure with the traffic squeeze by launching a tirade of profanity at volunteers and deliberately driving into one of the wooden planters marking the pedestrian and cyclist zone and knocking it out of place.

“We’ve had overwhelmingly positive reaction from people since we started work on Thursday night,” said Amanda O’Rourke, executive director of 8 80 Cities which is organizing this weekend’s event, in an interview with Beach Metro News on Friday morning shortly after the incident with the van driver.

“There have been some incidences where people are frustrated because they are trying to get through, but the goal here is to experiment and get feedback and hear what people think about it.”

Basically, 8 80 Streets Danforth is aiming to improve pedestrian safety and find ways for the City of Toronto to achieve its Vision Zero goals through infrastructure changes that make people look at streets differently. The term 8 80 is used to indicate that the streets are safe for children all the way to seniors (ages 8 to 80).

It is being presented with the support of the Danforth East Community Association, the Danforth Mosaic BIA and Earth Day Canada. Many of those organizations, along with local high school students, are volunteering during today and tomorrow’s events.

Danforth is being transformed between Woodbine and Woodmount to feature separated bike lanes, two small “parklets”, improved lighting, extra seating, and a painted mural at Moberly Avenue. There will be activities for families, entertainment and an opportunity to enjoy Danforth Avenue in a different way.

“They will see a street that exists for cyclists, pedestrians and cars to use, and that this is a way we can help bring pedestrian fatalities down to zero,” said O’ Rourke.

The aim of 8 80 Cities is to help make road designs and streetscapes that are more “human-centric” and are “joyful” for all people to use.

Beaches-East York Councillor Brad Bradford was also at the site on Friday morning, and pointed out that pedestrian and street safety issues were one of the main concerns he heard during last fall’s municipal election campaign.

“There are so many people and families who use Danforth on a regular basis, and this is where they want to be and they want to be safe when they are on the streets and sidewalks,” Bradford said.

He said it was not a coincidence that the local BIA and community association were supporters of the 8 80 pop up as it met the goals of safety for residents and increased pedestrian traffic for local businesses.

Bradford pointed out that the neighbourhoods along Woodbine Avenue between O’Connor Drive and Kingston Road were full of families who consider Danforth Avenue the centre of their community, and want to enjoy the area in a safe manner.

Beyond the van driver, no other complaints were heard from drivers while Beach Metro News was in the area on Friday morning.

People sitting on the patio at Zav Coffee Shop and Gallery on Danforth Avenue just across from Moberly Avenue went out of their way to praise what was taking in shape in front of them while they enjoyed a coffee.

“We love it,” said Kevin Callahan, who grew up in the Woodbine and Milverton area but was back in town from his now home in San Francisco for a visit to see his mother.

“We love to see the revitalization here and how it’s putting people, and local businesses and residents first,” he said. “Let’s see a focus on foot traffic and people will come to the area and shop at the businesses.”

“We love it here,” added mom Margaret. “There are now so many nice places to shop and have a coffee.”

8 80 Streets Danforth is the first of its kind pop up on pedestrian safety in Canada and has the support of The Better Block Foundation which is an international organization of “tactical urbanists” who make temporary low-cost changes to an area to improve local neighbourhoods.

The official launch of 8 80 Streets Danforth is today (Friday, Aug. 23) at 4 p.m. at 2050 Danforth Ave., just across from Moberly Avenue. It will continue through Saturday until 3 p.m.