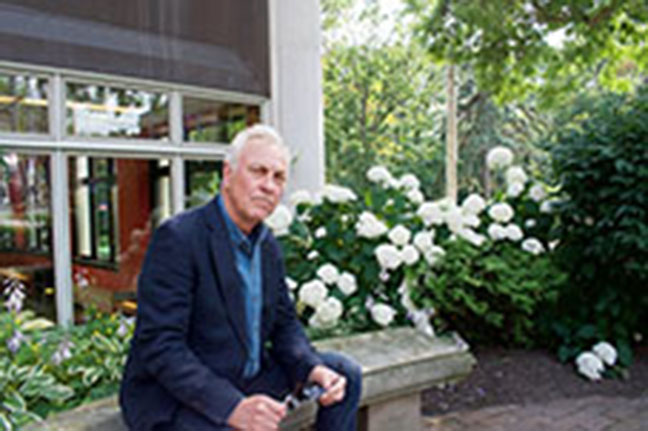 Menear, 65, is noted for his other works including One Dead Tree and a handful of short stories published on various platforms such as The Danforth Review.

“I haven’t been writing long at all, five years (or) six years,” said Menear.

Menear kickstarted his writing career when he was living in Montreal, across from the Westmount Public Library. He began spending a lot of time there writing.

“I heard on the radio there was CBC writing contest, and I thought yeah, I’ll do that. And I wrote this story called Blood Runs Deep,” he said. “It didn’t make the short list or the long list.”

“The next story got published right away. So I’ve been very lucky in my first two, three years, I got published in literary journals all over Canada,” he said.

Many of the stories in Swallows Playing Chicken are largely set in the Beach. Menear moved to the Beach for the first time when he was 10 years old.

“It’s important to me. And yes, I’ve lived all over different places. But I always come back here. It’s my home. I’ve lived on just about every street you can name around here,” he said.

Menear moved around frequently during these years, and he has lived near Kew Gardens, Fairmount Park, and Monarch Park.

Menear said the thing he loves most about the Beach is the proximity to the water.

One of the prominent landmarks appearing in one of his short stories is the Boardwalk, back when there were cement piers, an abundance of fish to catch, and fires crackling along the beach.

Menear said that writing is a bit of a slow process, due to his lack of ability to type properly.

“I’m happy, and I’m being sincere, if I can come out of an evening dithering around with a story, and I walk away with a good paragraph. You’re trying to make every word count…if they all count, then go to the next sentence and try to do that again. Make them all count.”

Menear said that when he first moved back to Toronto from Montreal five or six years ago, most of the people he had known in the city had moved away.

“It turns out I didn’t know anybody anymore. But it was good because I really focused on writing. That was the upside.”

Swallows Playing Chicken will be released on Oct. 15.

“To me it’s surprising, delightful, and I’m proud and happy,” said Menear.