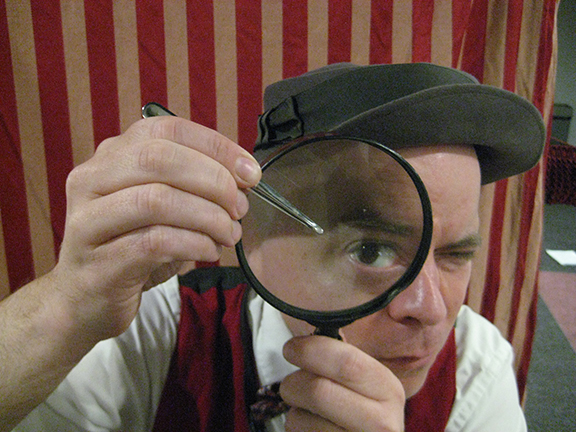 Buster Canfield's Circus of Industirious Fleas (aka Beach area resident Eric Woolfe) is among the many BuskerFest performers set to be at Woodbine Park over the Labour Day weekend.

The Toronto International BuskerFest for Epilepsy returns for its 20th anniversary and will be held for its fourth year in a row at Woodbine Park in the Beach on Labour Day weekend from Friday, Aug. 30 to Monday, Sept. 2.

This event is recognized as one of the biggest street-performer festivals in North America, featuring a lengthy list of artists and musical acts, many of which are local talent.

The event moved to Woodbine Park four years ago after previously being held at on Yonge Street.

“Well, we were looking for a venue that was a bit more family-friendly and had a bit more space to breathe,” said Mackenzie Muldoon, director of communications at Epilepsy Toronto.

“What we love about Woodbine Park and what it offered was a lot more green space and more of a blank palette for us to tell the story of epilepsy as well with this festival.”

This is the largest epilepsy awareness event in the world, and admission is only by donation to Epilepsy Toronto, which will fund counselling, support groups, training, and educational programs.

Some of the local talents showcased at the festival will include Buster Canfield’s Circus of Industrious Fleas a.k.a. Eric Woofle, a combination of flea training, magic and puppetry; SUPERFIRE, an all-girl fire show using props like hula hoops; and The Little Big Top, which is at the central circus tent featuring a quick rotation of shows of acrobatics, juggling, comedy, and magic.

“What’s fun bout BuskerFest is that you really get back down to the roots of being a performer. It’s just you and the audience. And the money you make and the attention they give you is based on how much they like you,” said Woolfe.

He has been travelling around with the flea circus for eight years. He has conditioned the fleas to perform in various ways and said there are almost 90 minutes worth of flea acts.

Woolfe is a Beach resident who has performed at BuskerFest before, but never at Woodbine Park.

“I walk my dog in Woodbine Park all the time. The other exciting thing about this year is it’s not far for me to travel,” he said.

New attractions have been added to BuskerFest this year, including a Toronto hula hoop dance party on Sept. 1.

The Great Lakes Brewery is also hosting the Beer Garden in the gazebo in the park, where attendees can enjoy Buskers After Dark, a set of music acts playing as the sun goes down.

Special performances include group benefit shows on Friday, Aug. 30, and Monday, Sept. 2. This is when five or six performers come together to put on a variety of acts in 45 minutes, said Muldoon.

“Then as we pass the hat, all that money goes to Epilepsy Toronto. So it’s a good benefit for the charity. And it’s a great way to catch a whole bunch of acts, and then you can pick your favourite and go see the whole act…or if you’ve been seeing acts all day you get to see the highlights again,” said Muldoon.

Muldoon said that every year the audience is given the chance to pick their favourite busker to win the People’s Choice Award. Every person who casts a ballot is entered into a draw to win a $100 gift card to Murphy’s Law Kitchen and Pub, which is located at the corner of Kingston Road and Woodbine Avenue.

The winner of the People’s Choice Award will be announced at the end of the Sept. 2 group benefit show.

“We find out who the audience chooses as their favourite and then that performer gets an automatic invite back (to BuskerFest),” said Muldoon.

It is estimated that 150,000 people will attend BuskerFest over the four days of the Labour Day weekend, and meet the goal of raising at least $100,000 through admission by donation. Attendees are encouraged to bring cash to tip buskers and enjoy other services.

For full dates and times of performances and a list of performers, as well as all other information visit: https://torontobuskerfest.com/whatsup_schedule.php