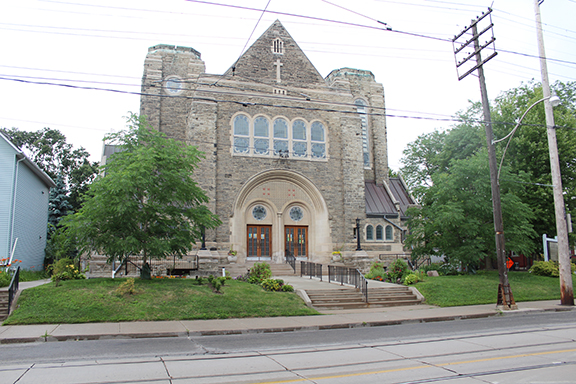 We try to emulate all the great teachings, works and charities that Jesus taught us. Here in the Beach this church stands on Queen Street East between Woodbine Avenue and Kingston Road as a monument to all those who have been involved in the good work that has been done by the clergy and parishioners.

Nowadays, Corpus Christi is still involved in helping those in need by hosting events such as interfaith lunches, helping The Good Shepherd Centre, and food drives etc…

The present pastor, Prasanth George, carries on the good work of the many good curates and pastors that have been at Corpus Christi.

This brief history begins with St. Paul’s Roman Catholic Church which started in 1807 at the present Parliament and Queen streets. Later, other churches sprang up in the east end of Toronto: St. Joseph’s in Leslieville was started and then St. John’s on Kingston Road at Malvern Avenue in 1892.

However, a movement was started during the First World War for a new church to be established in the Beach.

Father Stanislaus McGrath took up this enormous task and after soliciting all the clergy, he succeeded in establishing Corpus Christi in 1919 close to where it is located today. It started as a wooden building a little to the north of the present church site.

In 1927, Father McGrath’s work came to fruition as under the guidance of architect J. Gibb Morton and prominent builders Whitehall & Son, construction on the present church building began.

It was built in a 12th century-Roman style and the size was to be 140-by-60 feet. Like other Roman Catholic churches, it was to be built in the shape of a cross. The building material was Credit Valley stone and Indiana stone for the exterior.

The interior was architecturally pleasing with the column arches in stone. Old oak wood was used in the interior and massive trusses were added in the back of the altar. The sound was one of the best in the city.

The rectory was also built in three sections: the office, clergy quarters, and domestic quarters.

It was in the 1970s when the beautiful side mural was done by William Kurelek. This extraordinary work of art is in two stages. On top is the resurrection, and on the bottom it represents the clergy and the parishioners in Woodbine Park in prayer.

There is so much to write about this church building, but it is not brick and stone that makes the church, it is the people, who for the past century have made Corpus Christie what it stands for.

The clergy such as Father McGrath, Father Hickey, Father Wood, Father Coffee, Father Ambrose, Father Tourmec, Father Day, Father O’Toole, Father O’Donnel, Father Giroux, Father Douglas and others who worked in the church. The list goes on and on, too numerous to mention them all.

The church is not only for baptisms, communions, feast day masses – it is the Christmas spirit all year long.

The church also has its sports people and tennis champs to be proud of from the Beach community. There were great hockey players like Reginald “Hooley” Smith (the Wayne Gretzky of the 1920s) who were from Corpus Christi.

Many parishioners also helped the church when it was in need, as there were two major fires and other issues – but that is history for another time.

Now we have to celebrate the church.

There will be several events at the church itself to celebrate the centenary. There will be two tours of Corpus Christi to show the different parts of the church and the famous mural.

The first tour will be on Saturday, Sept. 28 from 1 to 3 p.m. starting at the front of the church.

There will be guides at both tours to answer questions on Corpus Christi, which is an historic building.