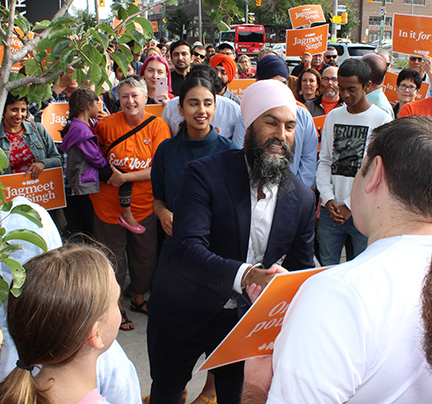 Federal NDP leader Jagmeet Singh is greeted by the crowd on Carlaw Avenue in advance of a pre-election rally Sunday, Sept. 8, at Streetcar Crowsnest theatre. Inset photo shows Olivia Chow and Michael Layton introducing Singh to the crowd in the theatre. Photos by Alan Shackleton.

Federal NDP leader Jagmeet Singh held a pre-election campaign rally for candidates and supporters from across the Greater Toronto Area on Sunday, Sept. 8, in the Toronto-Danforth riding.

The rally took place at the Streetcar Crowsnest theatre at Carlaw Avenue and Dundas Street, and featured a large partisan crowd gathered on Carlaw to welcome Singh as he stepped off his newly unveiled campaign bus.

It was no coincidence that the rally took place in the Toronto-Danforth riding, as it was the riding that had been represented for many years by late federal NDP leader Jack Layton.

His presence was strongly felt at Sunday’s event, as Singh was introduced to the crowd inside the theatre by Layton’s wife Olivia Chow and his son Michael.

“Jagmeet Singh understands hardship, he knows what it is to have to struggle. I see a lot of Jack Layton in Jagmeet Singh,” said Chow in her introduction.

Layton held the Toronto-Danforth seat for the federal NDP from 2004 until his death in August of 2011.

Prior to serving as MP, Layton had been a long-time City of Toronto councillor.

He was named leader of the federal NDP in 2003. In the federal election of May 2011, he led the party to its best ever finish; winning 103 seats and making the NDP the Official Opposition to Prime Minister Stephen Harper’s Conservative majority government.

After Layton’s death, the NDP was unable to continue the momentum it had established in 2011, and saw its seat numbers reduced to 44 after the 2015 federal election in which Justin Trudeau’s Liberals won a majority government.

That election also saw the Toronto-Danforth riding elect Liberal Julie Dabrusin over NDP incumbent Craig Scott, who had won the seat for the NDP in a 2012 byelection after Layton’s death. Winning Layton’s old riding back was clearly on the mind of Chow as she made her introduction of Singh on Sunday.

“We will take back Toronto-Danforth and make the riding orange again,” she said.

During the rally, Singh also touched on the legacy of Jack Layton and what he meant to not only East Toronto but all of Canada.

“I say thank you to Olivia and Mike for continuing such a powerful legacy.”

Singh spoke of how Jack Layton’s words inspired him when he was running provincially for the NDP in Brampton. It was a tough race, and Singh had been told by many that the party could never win a seat in the community located northwest of Toronto.

“People were saying it was impossible to win it, but Jack said to me ‘Never let anyone tell you it can’t be done’ and I believed him when he said that, and he was right.”

Singh won the race to be MPP in the riding of Bramalae-Gore-Malton in 2011, and served in that position until 2017 when he was named leader of the federal NDP. Singh, who is Sikh, became the first person to wear a turban to serve in the Ontario Legislature.

He has been MP for Burnaby South since winning a byelection earlier this year.

When named leader of the federal NDP, he became the first visible minority person to lead a federal Canadian political party.

He said believing in the impossible and making it happen was part of the inspiration provided to him by Jack Layton.

“Who ever imagined that someone that looks like me could run to be prime minister,” he told the crowd on Sunday. “Kids come up to me and say ‘I believe I can do anything, be anything I want to be.’”

During the rally, Singh hammered home one of the NDP campaign’s slogans they there “were in it for you.” He also made repeated references to failures by the Trudeau Liberals to live up to promises on a number of issues including national pharmacare, affordable housing, indigenous rights and the environment.

Many of those references drew cries of “shame” from the audience.

However, the biggest boo of the night came when Singh mentioned Ontario Premier Doug Ford.

“The Conservatives are not the answer,” Singh said. “Look what Doug Ford is doing right now in Ontario.”

After the booing stopped, Singh said, “I guess you don’t like Doug Ford here.”

The federal election will take place on Monday, Oct. 21. The deadline to officially begin the election campaign is this Sunday, Sept. 15, and the call is expected to be made later this week.

Running in the Toronto-Danforth riding are Zia Choudhary for the Conservatives, incumbent Julie Dabrusin for the Liberals, Min Sook Lee for the NDP, and Chris Tolley for the Green Party.