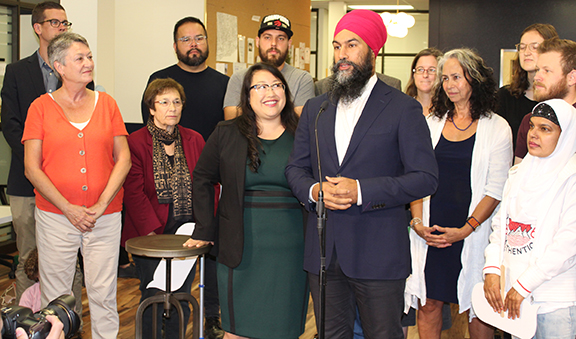 Jagmeet Singh, the leader of the federal NDP, made his second stop in East Toronto in less than a week with a national policy announcement on telecom pricing in the Beaches-East York riding on the morning of Friday, Sept. 13.

Singh was at The Workaround, at the northeast corner of Woodbine and Danforth avenues, this morning to say his party was committed to lowering the cell phone bills of Canadians and that the NDP would stand up to the big telecom companies.

“Canadians deserve better than Liberal and Conservative governments that keep making life easier for their corporate friends and harder for everyone else,” Singh said at the announcement.

“I’m ready to fight for everyday people and stand up to rich telecom companies. Our plan to cap prices on cell phone and internet bills is part of our commitment to make life more affordable.”

Singh pointed out that Canadians pay among the highest rates for cell phone and internet data usage in the developed world.

He cited both Australia and the United States as countries where competition, equal access to infrastructure and caps on how much telecom companies can bill have led to lower costs for consumers.

The federal NDP is paying a lot of attention to East Toronto ridings in the first week of the campaign leading towards election day on Oct. 21. Singh also held a pre-election rally in Toronto-Danforth on Sunday, Sept. 8. ( https://www.beachmetro.com/2019/09/09/federal-election-2019-ndp-leader-jagmeet-singh-holds-pre-election-rally-in-toronto-danforth/ )

In response to a question by Beach Metro News at Friday’s announcement, Singh said that winning back former NDP ridings in East Toronto was “very important” to him and he was “extremely confident” the party would do so.

Going into the 2015 federal election, Beaches-East York, Scarborough Southwest and Toronto-Danforth were all held by the NDP. Going into this October’s election, all three of those ridings are held by the Liberals.

Nam introduced Singh at this morning’s announcement, and said she was “proud and honoured” to be running under his leadership in Beaches-East York.

She said high cell phone bills were among the concerns she’s been hearing from constituents while out canvassing.

Residents are also expressing “frustration and cynicism with leaders and politicians who say one thing, and often the right thing, and then not follow through with them,” Nam said in her introduction of Singh.

Singh echoed Nam’s introduction with praise of his own for her. “Mae, you such an impressive person. The people of Beaches-East York would be well served by having you as MP.”

Also running in the Beaches-East York riding in this election are Liberal incumbent Nathaniel Erskine-Smith; Deborah McKenzie, of the People’s Party of Canada; Nadirah Nazeer, of the Conservative Party; and Sean Manners, of the Green Party.