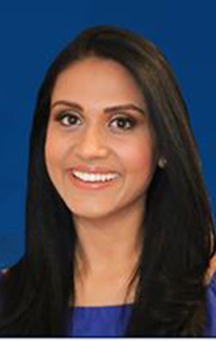 Nadirah Nazeer is running for the Conservative Party in the riding of Beaches-East York in this fall's federal election.

Nadirah Nazeer will be running for the Conservative Party in the riding of Beaches-East York in this fall’s federal election.

Nazeer, 46, has lived in Toronto and the Greater Toronto Area since first moving to Canada 29 years ago from Mauritius. She speaks both English and French.

She has worked for the past 21 years in the private sector and is presently a Global Development Manager for a Fortune 500 company.

Nazeer has also been a leader in support of numerous social causes, and in the entertainment industry where she hosts her own talk show TAG TV (a broadcasting and media production company based in Mississauga that reaches its audience in Canada and the U.S. through IP boxes, cable, social media and apps). The theme of Nazeer’s TV (Tag Talk with Nadirah Nazeer) showfocuses on her values of tolerance, mental and physical health, well-being and self-improvement.

Along with her community and media work, Nazeer also has prior political experience as she has been a campaign manager at both the federal and provincial level.

A mother of three sons now in their 20s, Nazeer said her concerns about the financial sustainability of how Canada was being governed and what our country’s future would hold if changes were not made inspired her to run for the Conservative Party.

“As an immigrant, a mother and businessperson, I understand the great potential that Canada has for everyone. Over the last few years however, we’ve seen life become more unaffordable for just about everyone,” she said.

“As we look towards the future, I knew I wanted to be part of a movement that recognizes that the services that we rely on from the government are reliant on both fiscal and environmental sustainability. Therefore, the Conservative Party was the natural choice.”

Nazeer has been a volunteer and advocate for a number of women’s and immigrant support groups in the GTA.

“These include Zonta International and my local women’s shelter and food bank,” she said.

“I was also involved leading a drive for furniture and clothing to help new immigrant families in my community get settled. I firmly believe in uplifting the most vulnerable in our society and providing opportunities to help Canadians succeed, a mentality I would strive to embody as your next Member of Parliament.”

In an opinion piece published in the National Post in May of this year Nazeer wrote that standing up for women’s rights is also one of her core values, and she was inspired to do so by family members and the freedom and opportunity available in Canda.

“I believe this story could only have happened in a country that is built on a foundation of meritocracy and equality,” she wrote. “Canada has given me many opportunities that some girls and women around the world can only dream of. I strongly believe it is our duty to give back to our communities and create opportunities, especially for women.”

Nazeer said she considers climate change and the rising cost of living among two of her most important issues in this fall’s election campaign.

”With the cost of living going up, many are finding it harder to make ends meet, affecting their ability to put their kids in after-school programs, visit family or buy a home,” she said.

She added the Conservatives also have a solid plan to address climate change.

“We have a real plan to address the serious issue of climate change, which threatens our whole planet,” said Nazeer.

“By incentivizing people to make their homes more green-friendly, helping the largest polluters reduce their emissions, and making Canada a leader in green tech, I know we can win this fight.”