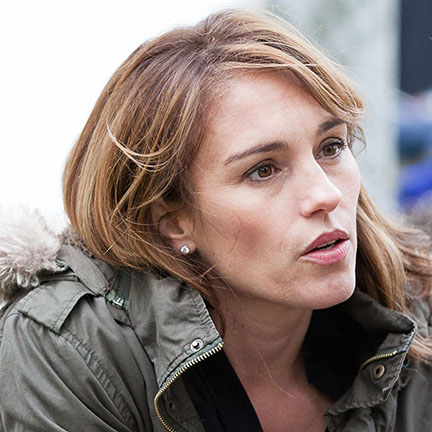 If Shakespeare were around today he might write (or perchance tweet) that “one woman in her time plays many parts. Her acts being seven ages.”

Beach resident Amy Jo Johnson has been gymnast, actor, singer, songwriter, writer, director and mother. She is “thrilled” that her second feature film as a director, Tammy’s Always Dying, played its world premiere at this year’s Toronto International Film Festival.

You may remember Johnson as the Pink Power Ranger or the friend Julie on Felicity or the strong policewoman on the Canadian TV series Flashpoint which brought her to Toronto.

If you happen to see her walking on Queen Street East (as I have), she’s a busy Beach mom. As her Facebook says, “I’m an artist by nature and a mother at heart.”
As part of TIFF, Amy Jo Johnson spoke to enthusiastic fans at the OLG Dream Deck at Bell Lightbox: “Since I was seven years old I just wanted to perform.”

She was born in Cape Cod, Mass. and left for the bright lights of New York City as a teenager. Johnson found fame acting on popular television shows, but felt, “I liked it, but never loved it. I love directing …I get to use every part of my personality.”

In 2005, turning 35 and living in Los Angeles, she “hated acting”, becoming “a very insecure actress. I needed to get out of L.A. because I was constantly comparing myself to everybody around me and that’s just a terrible way to live”.

On a “whim” she packed up her life and moved to Montreal. She came to Toronto in 2008 after landing her role in Flashpoint and “fell in love with acting and the entertainment industry again”.

She also “found a city that I love, such a generous city and country for filmmakers”.

“I love being a filmmaker in this town.”
Amy Jo Johnson

What she really wanted to do was write and direct. In 2017 Johnson completed the Director’s Lab at the Canadian Film Centre which was founded in 1988 by the legendary filmmaker from the Beach, Norman Jewison. The talented directors of his generation had to leave Canada to fulfill their dreams. Now Toronto is attracting artists from around the world.

Every family has its own humorous and sad stories to tell. Johnson revealed that her father is a “non-functioning alcoholic, but he’s still absurdly funny”.

For her third feature, Crazier than You, she wants to play her mother in a film she is writing about a woman’s spiritual journey through love, motherhood, cancer and a religious cult. It’s based on her late mother’s 12 years in a cult.

As the Bard would say, “all the world’s a stage and all the men and women merely players”.

We each have our own new acts to live through and learn what it means to be human.