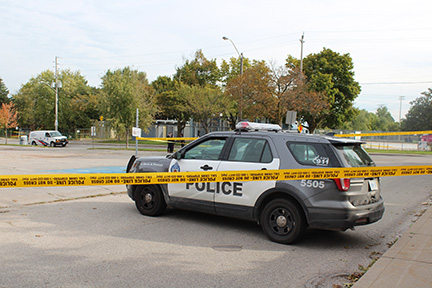 Toronto police investigate a homicide in which a 16-year-old boy was "intentionally struck" by a vehicle at Cedarvale and Bracebridge avenues in East York on Monday, Oct. 7, morning. Inset photo shows Det. Leslie Dunkley of the Toronto police homicide squad talking to reporters at the scene on Monday morning. Photos by Alan Shackleton.

Toronto police’s homicide squad has taken over the investigation into the death of a 16-year-old boy in the Cedarvale and Bracebrige avenues area early Monday morning.

Homicide Det. Leslie Dunkley said the victim was “intentionally struck” by a dark-coloured SUV at approximately 2 a.m. on Oct. 7.

He said police were called to the area at 2:06 a.m. and found the male victim without vital signs. The victim was found almost directly across from Stan Wadlow Park, just north of East York Memorial Arena.

“It’s still early in the investigation, but there was an interaction between our victim and the occupants of the vehicle,” Dunkley told reporters at the scene on Monday morning.

He said there were two people in the vehicle, but did not say whether they were males or females.

“We’re still trying to determine the occupants of the vehicle,” Dunkley said.

The SUV was last seen heading northbound on Woodbine Avenue. Dunkley would not confirm a rumour that the vehicle involved was a Porsche Cayenne.

“We’re still trying to determine the make of the vehicle,” he said, but added that it would have obvious front-end damage.

Dunkley said images of the suspect vehicle would likely be released by police later today once surveillance video in the area had been gone through.

He said police were canvassing the area for witnesses and for video surveillance evidence.

He also asked anyone in the area of Woodbine and Cosburn avenues who has home security camera images or dashcam images from the approximate time of the incident to contact the homicide squad at 416-808-7400.

This incident took place exactly two years to the day that 15-year-old Isaiah Witt was fatally stabbed in Stan Wadlow Park on the night of Oct. 7, 2017.