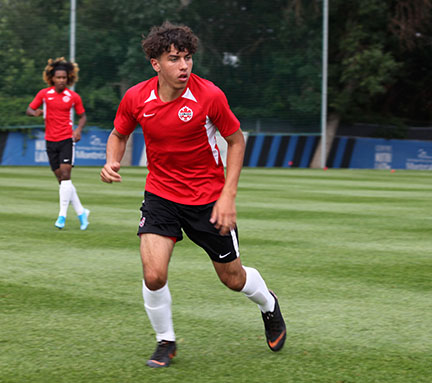 Kobe Franklin, who played in the Beach Community Soccer League as a youngster, is a member of the Canadian team heading to the FIFA U-17 World Cup in Brazil later this month. Photo: Submitted.

When midfielder Kobe Franklin steps onto the field for the opening match of the FIFA U-17 World Cup 2019 in Brazil on Oct. 26, hearts will beat across Canada but particularly in the Beach.

Not so long ago, this 16-year-old player was just a kid kicking a ball by the water, while having fun playing with the recreational Beach Community Soccer League.

The biggest boost to his soccer career came from his mom and dad, he said.

“My parents put me in the sport to keep me active as a little one, and ever since then I have been in love with the game.” Franklin said.

The Beach community league was pivotal as a place to start off his career, he said. “The spark came from playing there at such a young age with my friends from around the community.”

Afterwards, Franklin polished his skills fairly quickly thanks to an opportunity to play for MLS Chicago Fire Soccer Club Academy, when he moved to Chicago with his family.

From age 9 to 13, he played against some of the biggest soccer academies in the world, such as Crystal Palace and Valencia. Moving back to Toronto, he made Toronto FC Academy and then the Canadian U-17 squad.

Franklin is eager to represent Canada and excited to play in the opening match of the U-17 World Cup.

In addition to the hot weather in Brazil, he is concerned about the high quality of the participants.

On the Canada side, Franklini said the team is a very close group who share a passion for the game. “We are all working to put everything on the line for each other.”

Franklin feels that competing on the world stage is an opportunity for Canada, mostly an underdog in men’s soccer, to showcase its reputation for producing young talent.

“We have so many good players playing at all levels that when we come together to play at tournaments, we are a force.”

The success of Canada in women’s soccer is a model but not the only influence for Franklin, who finds inspiration in other Canadian sports achievers, such as the phenomenal tennis player Bianca Andreescu. “I love to see Canadians win,” said Franklin.

While waiting for the kickoff in Brazil and perhaps for the first soccer world title for Canada, Franklin dreams of furthering his career playing professionally in European leagues. Soccer stars like Messi, Mbappé, and Neymar are among those who help him to keep his dreams alive.

“They are such a joy to watch and are like magicians with the ball.”

Meanwhile, Franklin has made his own magic by realizing his childhood dream of playing in the World Cup.