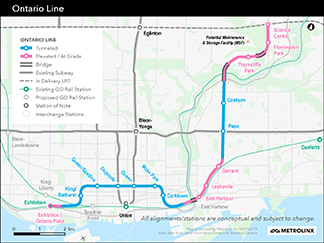 The route of the province's proposed Ontario Line will have a significant impact on residents near the GO tracks between Pape and Broadview, a meeting last week was told.

Toronto-Danforth residents will have the opportunity express their concerns and frustrations about the route of the province’s proposed Ontario Line to Toronto Council’s Executive Committee on Wednesday, Oct. 23.

We need to teach them to “protect our neighbourhood,” said Toronto-Danforth Councillor Paula Fletcher at a meeting about the Ontario Line held for local residents on Thursday, Oct. 10, at the Ralph Thornton Centre on Queen Street East.

Fletcher and Toronto-Danforth MPP Peter Tabuns hosted the meeting to provide community members with an update on the Metrolinx project, and to teach attendees how to advocate their concerns to the city’s Executive Committee.

“It’s very important you come and speak,” said Fletcher, who does not sit on the committee. “We want the Executive Committee to know what it’s like to live along the GO Line.”

Making the Oct. 23 Executive Committee even more important is news released this morning (Wednesday, Oct. 16) that the province appears to be backing down on its bid to take control of Toronto’s subway system in exchange for the city’s support of the proposed Ontario Line and the Scarborough Subway Extension.

Three GO Line tracks already operate above ground through the neighbourhood bounded approximately by Pape and Gerrard streets and southwest through to Eastern and Broadview avenues, and trains run at intervals of approximately three and half minutes in both directions

Area residents are concerned the additional tracks proposed for the area by the Ontario Line and the increased frequency of passing trains will undermine the quality of life there.

Safety, noise and vibration pollution, and the loss of public spaces, like parks, top the list of concerns, those at the meeting on Oct. 10 heard.

The Ontario Line is proposing three new tracks, which will operate above ground halfway between Corktown and East Harbour, to Gerrard Street East.

Local residents at the Oct. 10 meeting are focused on the impact the approximately two kilometres of above-ground rail will have on their community.

However, the Greater Toronto Area’s frustration with gridlock is growing and city councillors are feeling the pressure from their constituents to provide transit relief.

“Everybody here is a big transit supporter,” Fletcher said. “But we want transit that works in our neighbourhood.”

The Oct. 10 meeting included a question period where residents expressed their frustration with the province’s privatization of transit, and the costs and procedures of Metrolinx’s latest Environmental Assessment.

TTCRiders Executive Director Shelah Pizey-Allen, who attended the meeting to listen to local concerns, said, “This is our big opportunity. Not to just ask for what we want locally, but the big picture: that the government’s plan is delaying transit by years.”

Tabuns said Toronto-Danforth’s organization against the Ontario Line could be the start of a “big headache” for Ontario Premier Doug Ford.

Fletcher advised local residents who want their opinions heard at the Executive Committee to focus their letters and deputations on the Ontario Line’s effects in the community.

Pictures and videos are a strong source for committee members and other city councillors to understand how the Ontario Line could affect the quality of life in the community, she said.

All letters should be sent to the Executive Committee at exc@toronto.ca or to Fletcher’s office at councillor_fletcher@toronto.ca

Pizey-Allen says TTCRiders will also be providing background info and tips on how to write a deputation at www.ttcriders.ca

Anyone who wishes to depute will have three to five minutes, though Fletcher said it is best to plan for the three minutes, to offer everyone an opportunity to speak.

For more information on the Ontario Line, please visit https://metrolinx.files.wordpress.com/2019/07/click-here-to-view-the-ontario-line-initial-business-case.pdf