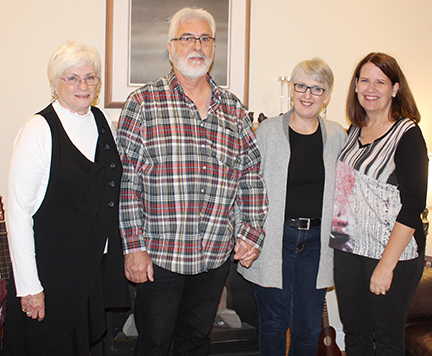 From left, Linda Mahoney, Rod Buttiegieg, and Heather Brown are joined by homeowner Leslie Simmons during a reunion at their old Pickering Street house. Inset photo shows Linda, left, Rod, and Heather as children in the house. Photo by Alan Shackleton.

A stroll down memory lane in August led to full-scale house reunion this week as three former residents of a home on Pickering Street were able to re-visit their lives as children and teens.

Linda laughed as she visited the upstairs back bedroom which she would many times sneak out of at night, to meet with her “buddy” and next-door neighbour Gary Pritchard.

“I would sneak out the window and onto the roof, and Gary Pritchard would put a ladder up,” Linda remembered with a laugh.

The visit came about after Heather, who now lives in Oshawa, decided to take a trip back in time by visiting the house she had lived in from 1956 to 1961. She was standing on Pickering Street with her husband Jim who had also grown up in the neighbourhood on Scarborough Road, looking into the house and remembering days gone by when she was noticed by the present homeowner.

“I saw these two people looking into the house,” said homeowner Leslie Simmons who has lived in the home on Pickering Street with her family for the past 22 years.

“I waved at them and they waved back,” she said.

And from there, the reunion was in the works for Linda and Rod to also come back and visit the family home they had lived in from approximately 1955, when their parents bought the house, to 1967 when they sold it.

Linda and Rod said their parents did not have a lot of money and were often renting either the basement or top floor of the house (sometimes both at the same time) out to other families so they could pay the mortgage.

“I have slept in every room in this house,” said Linda, mentioning a space under stairs that once contained her bed. When the she, Heather and Rod went to look at the basement with Leslie there was still a bed in the exact same spot under stairs.

They also remembered how the bathroom, laundry room and bathtub were all in the same area at the back of the basement beside the old oil tank for the furnace.

“The bathtub had a hose from the laundry tub to fill it,” remembered Heather. “When you pulled the plug, the water went down right over the laundry drain.”

In approximately 1967, the Buttiegieg’s sold the home on Pickering Street and moved to a 15-rooom house on Hambly Avenue. “I think we rented out almost every room in that house too,” remembered Linda.

Rod said his parents decided to sell the Pickering Street house because it needed expensive repairs due to the fact it had once been clad with Insulbrick (a tar shingle made to look like brick).

Linda estimates the house on Hambly cost her parents $33,000 at the time.

“My mother bought the Hambly house and sold the Pickering house in one day,” she remembered. “My father came home from work and it had all been done.”

She and Rod remembered that the local real estate agent used at the time was named Bill Fysh and he had for sale signs shaped like fish.

Heather lived in the house with her mother who rented space, and she and Linda became friends as they were close in age.

Leslie said she was happy to be able to welcome the former residents to their old home, and wasn’t surprised to hear it had once been lived in by so many people at one time.

“We’ve raised five kids in this house as well,” she said. “It’s nice that these ‘kids’ were able to come home again.”