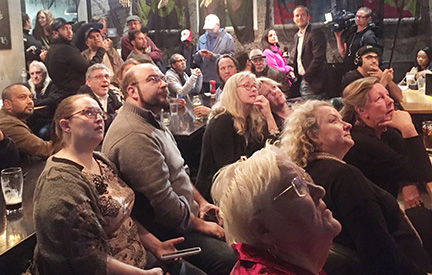 Nathaniel Erskine-Smith, standing, is joined by supporters at his campaign party on Monday night at the Firkin on the Danforth. Inset photo, the celebration continues at the Firkin. Photos by Nina Rafeek.

Incumbent Liberal MP Nathaniel Erskine-Smith has been re-elected in Beaches-East York in the federal election.

With more than half of the 202 polls reporting, Erskine-Smith had a comfortable lead with 57 per cent of the vote.

“I think we accomplished a lot over the last four years,” Erskine-Smith told Beach Metro News from his campaign party at Firkin on the Danforth Monday, Oct. 21, night.

“But also there were decisions that were made and sometimes I didn’t agree with them, and constituents raised those issues. With incumbency comes a lot of advantage, but also there’s a record that has to be defended and at times comes with some criticism.”

In third was Conservative Nadirah Nazeer with 14.4 per cent of the vote.

In fourth was Green Party candidate Sean Manners with 6.1 per cent of the vote.

In fifth Deborah McKenzie, People’s Party of Canada, with 1.6 per cent of the vote. Heading into his second term, Erskine-Smith said he will pushing hard for more action on climate change.

Though still not official, it appears as if the Liberals will win the most seats in this election, but it won’t be enough to form a majority government.

Erskine-Smith said he was “incredibly proud” of the campaign that was run in Beaches-East York.