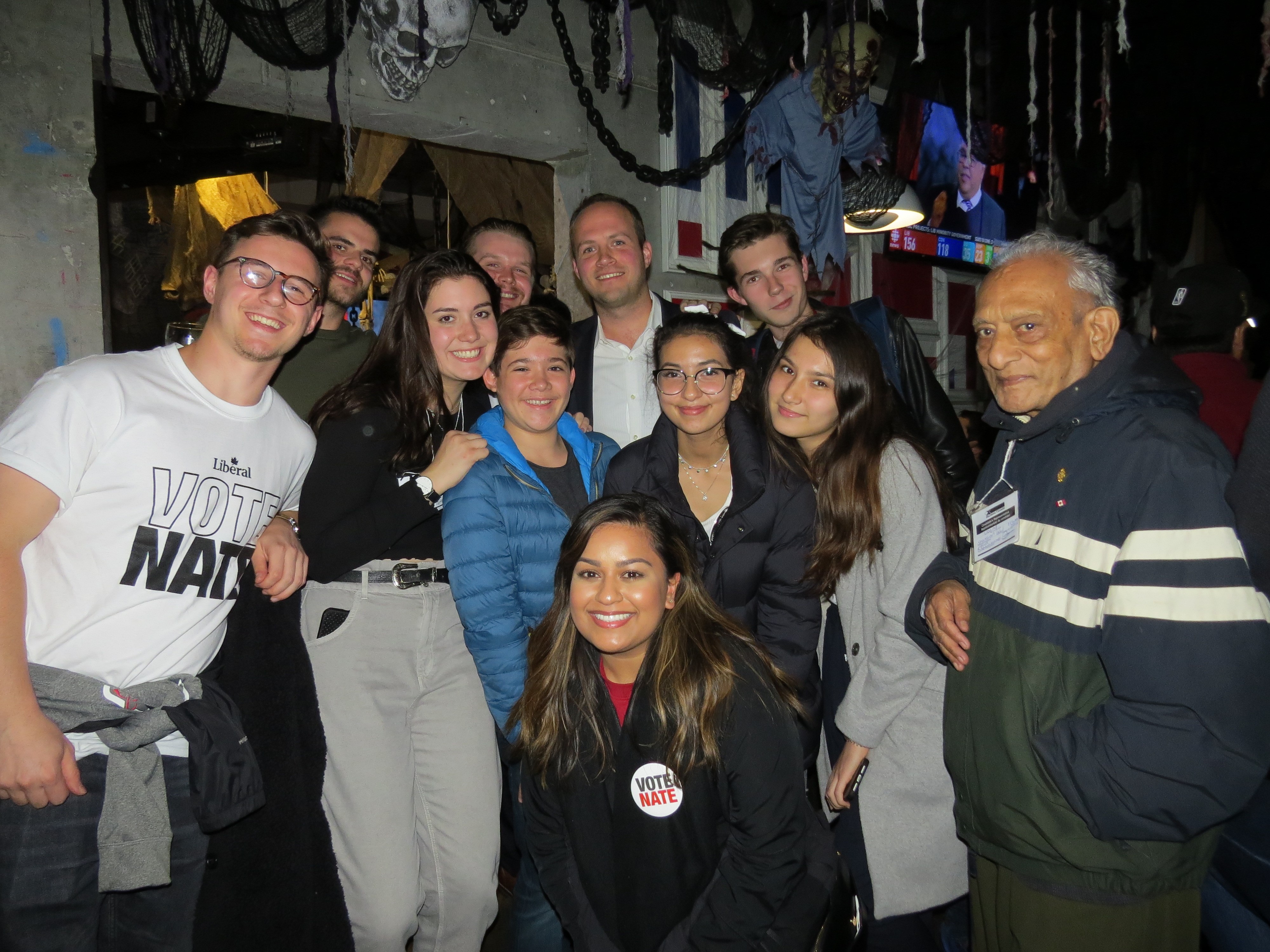 What was projected to be a tight race between Liberal candidate, Nathaniel Erskine-Smith and NDP candidate, Mae J. Nam, turned out to be a clear victory for the Liberal incumbent, who won the Beaches—East York riding by more than 20,000 votes.

As the election results started to pour in shortly after 10 p.m., Erskine-Smith was greeted by thunderous cheers and applause as he walked into the Firkin on Danforth Avenue.

“I`m incredibly proud of the campaign we ran, the last four years, all of our work, and our team. It`s a humbling experience being a candidate and you rely upon everyone around you, and I’m just so thankful for their support,” he said.

As residents celebrated Erskine-Smith’s victory, the re-elected Liberal MP shook hands, greeted supporters and took photos as he sipped on a victory pint from the bar.

Regarding the challenges he faced during this election, Erskine-Smith said that he focussed on the value of incumbency. “I think we really accomplished a lot over four years, both in my office and as a government, but also there were decisions that were made, sometimes I didn`t even agree with them […] but there`s also a record that has to be defended and at times, it comes with some criticism.

Overall, Erskine-Smith said that the election was much easier this time around because he was able to point to a lot of positive things they had done and that he personally worked on.

“I think people acknowledged that progress had been made and were asking me to push for even more serious progress and for the government to build on that. I`ll keep holding the government’s feet to the fire and to address income inequality and some of the affordability issues in our city,” said Erskine-Smith.

As for his focus over the next four years, Erskine-Smith has that he will answer the call to put forth more action on climate change, “I`ve already been very vocal about tackling climate change and to demand more serious action,” he said.

Of the other Beaches-East York candidates, Erskine-Smith said that he felt everyone ran a strong and positive campaigns locally, and gives credit to all the candidates who put their name forward.

Just across the street at the Workaround, dozens of proud supporters surrounded Mae J. Nam with NDP signs in-hand. “It was a real privilege and honour to run for office and it`s a beautiful thing to have the opportunity to talk to so many people about issues that matter,” NDP candidate, Mae J. Nam said.

“This isn’t the result we had hoped for, but I think we should all be incredibly proud.”

The runner-up said that she hopes to see “real action on climate change” and all Canadians having access to life-saving drugs from the Liberal government.

Going forward, the labour and human rights lawyer plans to take some time off to reconnect with her friends and family before continuing her work in social justice.

“I feel really lucky to be a part of the Beaches—East York community, and I`m going to continue doing what I`ve been doing for my entire life, which is fighting for social, economic and environmental justice,” she said.

Beaches-East York Councillor Brad Bradford showed up at the Firkin on Monday night to congratulate Erskine-Smith on his victory.

““Nate has always been a strong champion for this community and I expect that will continue,” said Bradford.

“The City of Toronto has a strong working relationship with the federal government, historic investments in transit, housing, and shoreline erosion. As a waterfront community, that’s really important,” he said.

“That’s really important to the residents and they campaigned on that, so we expect to see more of that in the future and I’m looking forward to working with Nate very closely right here in the riding,” said Bradford.

Here are the final results from Elections Canada with all 202 polls in Beaches-East York reporting:

According to Elections Canada, there were 80,981 registered voters in the riding of Beaches-East York, and 56,206 of them cast ballots for a voter turnout of 69.41 per cent.