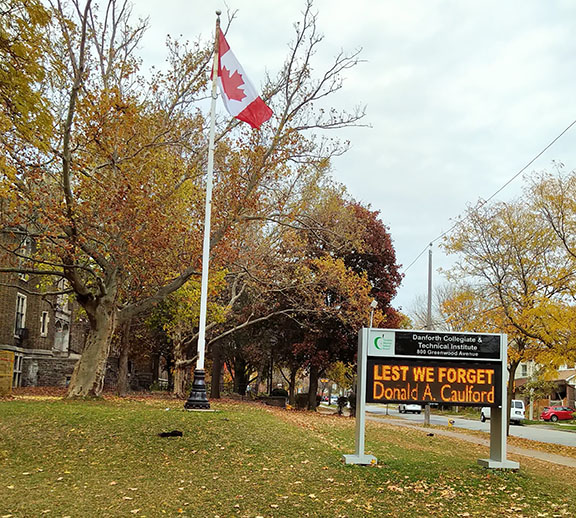 The sign in front of Danforth Collegiate and Technical Institute on Greenwood Avenue displays the names of the 2,300 people from the school who enlisted for service during the Second World War. The scroll of names is shown on the sign in the week leading up to Remembrance Day on Nov. 11. Photo by Alvin Ng.

In the days leading up to Remembrance Day, Danforth Collegiate and Technical Institute pays tribute to the 2,300 staff and students from the school who volunteered to serve their country in the Second World War.

The school, which first opened in 1923 on Greenwood Avenue just north of Danforth Avenue, has the distinction of having the greatest number of students, graduates, teachers and other staff to have volunteered for military service or the merchant navies in the Second World War of any school in the British Commonwealth.

Since November of 2017, Danforth CTI has recognized all 2,300 of those who served by having their names appear on the electronic billboard in front of the school in the week prior to Remembrance Day on Nov. 11.

Each name appears for five seconds, and it takes more than three hours for the names to scroll through on the sign from beginning to end.

Also recognizing Danforth CTI’s contributions to the Second World War effort are the stained glass windows that are the centrepiece of the school’s War Memorial Library which was dedicated in May of 1948.

In the school hallway outside the library are four illuminated panels with the names of those who enlisted written in calligraphy. The panels were designed by Group of Seven artist A.J. Casson.

Also, inside the library are two bronze plaques with the 241 names of those from Danforth who made the ultimate sacrifice and were killed during the Second World War.