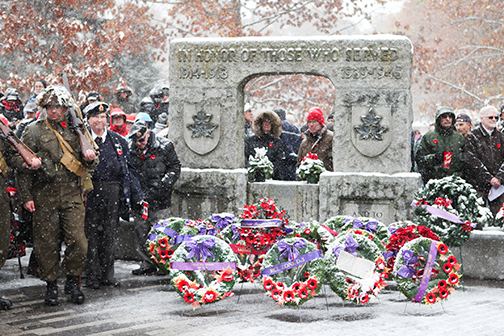 Residents did not let the snowy weather deter them from attending Remembrance Day ceremonies this morning (Monday, Nov. 11) at the Kew Gardens Cenotaph on Queen Street East. Photo by Phil Lameira

A large crowd spilling out onto Queen Street East gathered at the Kew Gardens Cenotaph on Monday, Nov. 11, to observe Remembrance Day.

The ceremony was hosted by the Royal Canadian Legion Baron Byng Beaches Branch 1/42, and featured hymns, prayers and two-minutes of silence to remember those who made the ultimate sacrifice.

The silence came at 11 a.m. as is the tradition to mark the 11th hour of the 11th day of the 11th month in 1918 when the Armistice came into effect and the First World War ended.

Today’s Remembrance Day ceremony also recognized that 2019 is the 75th anniversary of D-Day, which was the beginning of the end of the Second World War, and the fifth anniversary of the conclusion of Canada’s mission in Afghanistan.

Wreaths were laid at the Kew Gardens Cenotaph by a number of individuals and organizations including the Government of Canada, the Province of Ontario and the City of Toronto.