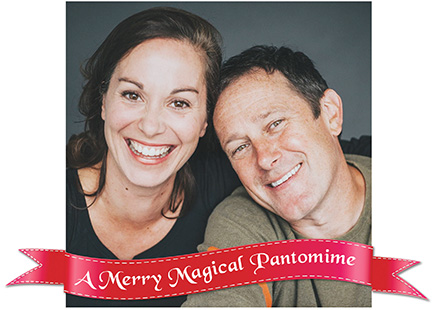 Torrent Productions will return to East Toronto this holiday season with its fourth annual production, Jack and the BeansTalk: A Merry Magical Pantomime.

The show will open on Friday, Dec. 20 at 7 p.m. and is slated to run for 12 performances until Sunday, Dec. 29. Performances will take place at the Royal Canadian Legion Branch 1/42 at Coxwell Avenue and Gerrard Street East.

Husband and wife team Rob Torr and Stephanie Graham of Torrent Productions think that the show will be a fun night out for families and people of all ages.

“Pantomime is an interactive, family night of fun. There’s something for everybody,” said Torr, the writer and director of the show.

“But it’s a pantomime so there’s lots of changes in the world. It’s very topsy turvy,” said Graham, the choreographer of the show.

Graham said that the show features a cast of musical theatre actors from regional theatres across the country, including the Stratford Festival. Cynthia Dale from Stratford Festival and CBC’s Street Legal will make a special guest appearance as the voice of the Giant.

Graham said that the show is a great way to bring people together during the holiday season, especially in the Beach where both Graham and Torr have been long-time residents.

“It’s nice to gather together and have a good time together,” she said.

“We celebrate the local neighbourhood and our local businesses, because that’s important to us. Community is everything and we try to celebrate that,” said Torr.

The show is an interactive and comedic experience for the audience.

Torr and Graham said that the audience can cheer for the hero Jack, and boo the villain.

The show will also feature a little bit of magic and a “sing song sing-along” at the end of the show.

“I like to hear a community laugh and sing together. And there’s fewer and fewer opportunities to do that, I find. That’s why panto is so important to me,” he said.

Torr said that Torrent Productions has received a great amount of support and that the goal is to keep growing.

“I love pantomime. Steph and I both think that it’s a really great introduction to live theatre for again, not just children, but for anybody who’s never been to see a live show before, and a great opportunity to learn to react to a live (theatre) situation,” said Torr. “It doesn’t take itself too seriously. It’s about fun.”

The show is recommended for ages five and up. Limited seating will be available at the venue.

For details about the show, cast, or Torrent Productions, visit www.torrentproductions.com