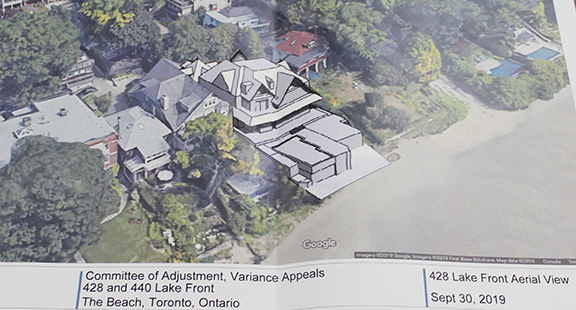 This image shows the size of the proposal for 428 Lake Front in relation to neighbourhing properties. The painting by Elizabeth Berry shows the east end of the beach near where another large-house proposal is being made at 440 Lake Front. Inset photo shows a view of the 428 property as it is now from the beach.

Residents in the Balmy Beach neighbourhood are preparing to fight a pair of proposed homes on the shore of Lake Ontario that they say will forever change the character of the area not just for residents but everyone who visits and uses the beach.

The proposals for the properties at 428 and 440 Lake Front, between Silver Birch Avenue and Nursewood Boulevard, are calling for huge homes on the properties that will dwarf most of the neighbouring structures.

Many of those residents gathered at a home in the area earlier this week to learn more about the proposals, and how they can fight them.

They have to go to the Committee because a number of variances to existing bylaws are being sought by the home’s owners to build the proposed structures.

Artist Elizabeth Berry has painted in the area for years, and said it is a unique and special part of Toronto.

Her painting of the houses at the foot of Neville Park captures the character the neighbourhood beautifully. “Note in my painting the natural beauty of the hillside. This should be preserved for all to enjoy,” she said in a note to Beach Metro News.

Lawyer Dennis Wood of the firm Wood Bull LLP, who are specialists in municipal planning and development law, is representing the neighbours on either side of the property at 428. They are objecting to the size of the proposed house, and will be taking those concerns to the Committee of Adjustment on Nov. 20.

“For the immediate neighbours, the concern is the house is too big and juts out too far towards the lake,” he told Beach Metro News in an interview.

“The house will have a length from the table land and down the slope of 43 metres,” he said. “What is permitted by the bylaw is 17 metres. It is more than double the permitted length.”

Wood said the square footage of the proposed house at 428 was between 10,000-15,000 square feet, which is much more than any other home in the immediate area.

“It significantly affects the people on either side whether they are in their house or in their yard.”

Further adding to the concerns is that the height being sought for the house at 428 is 14.5 metres, which is two metres higher than any other home in the immediate area, said Wood.

He pointed out that throughout the Beach, from Woodbine to Nursewood both north and south of Queen Street, the average house height is 10 metres.

Also, the percentage of the lot covered by the proposal also doubles what is usually permitted, he said.

Most of the 16 properties that actually front on to the lake along Balmy Beach are built on the table land and sit above a small bluff that slopes down to the beach itself. The properties include land below the bluff, and with the exception of some swimming pools do not have buildings on them.

With the possible exception of Ward’s Island, they are the only properties in all of Toronto that actually have a boundary line on a large sandy beach that can be walked out to at almost ground level. Many houses back on to Lake Ontario in the city but they are on top of the steep Scarborough Bluffs, separated from a beach area by park lands or back on to rocky breakwaters in southwest Etobicoke. Oddly, there are two four-storey apartment buildings along this stretch of the beach, one of which is at the foot of Nursewood and is believed to have been approved and built in the 1960s due to a zoning loophole that has now been closed. The other apartment is located at 15-21 Glen Fern Ave., and was built in 1928.

“This is a very important and unique area. That’s what makes it valuable real estate, and every new applicant is pushing the envelope on what will be permitted,” said Wood. “That’s what is happening here in this case.”

“The concern of myself and the general community is that this proposal completely excavates the bluff area and replaces it with a concrete building that goes right down to the lot line at the beach,” said Wood.

“It’s a very significant change in the look and feel of what people are used to seeing in that part of the Beach. It is way out of character with the houses along the beach and also other houses in the neighbourhood,” he said.

Wood added that if this proposal is ultimately approved, it is “inevitable” that in time almost every other property along that stretch of beach will be like it.

“We’re seeing this in real time with the proposal for 440 which is very similar. It will be a certainty that all the undeveloped lots will find their way to this kind of structure if it is approved,” he said.

Wood said it’s a situation that occurs along attractive beach fronts all over the world. “Where once there was original housing of modest homes or even beach cottages, you see the lots bought up and then they build these huge, huge homes.”

While the future of what the Balmy Beach area at the lake will look like is at stake with these proposals at 428 and 440 Lake Front, it is not elected councillors who will make the final decision on whether approval is given.

The Committee of Adjustment is made up of non-elected officials who will either approve or deny the many requested variance changes being sought by the applicants for these homes. Whichever way the Committee rules, the losing side will then have the option of going to the Toronto Local Appeal Body (TLAB) which is the local replacement for the former Ontario Municipal Board.

The TLAB, which runs in a similar manner to the way the OMB did, is also made up of non-elected officials who will ultimately rule in favour of the applicant or those opposed to the plan.

Wood added that his clients realize something will be built on the property at 424 and are not opposed to that, but it is the sheer size of the current proposal that has them objecting.

“We will be open to a reasonable application by the owner,” he said. “Their position is not that anything can be built there, but they’re asking the owner to come back with a reasonable plan.”

Local residents who wish to comment on either of the proposals can contact the Toronto and East York Committee of Adjustment at 416-392-0413.

Those wishing to comment specifically on the proposal for 428 Lake Front can also send an email to Bram Bulger in the city’s planning department at Bram.Bulger@toronto.ca

Those wishing to comment specifically on the proposal for 440 Lake Front can also send an email to Adam Wills in the city’s planning department at Adam.Wills@toronto.ca

Meetings of the Committee are open to the public to attend and make comments at.