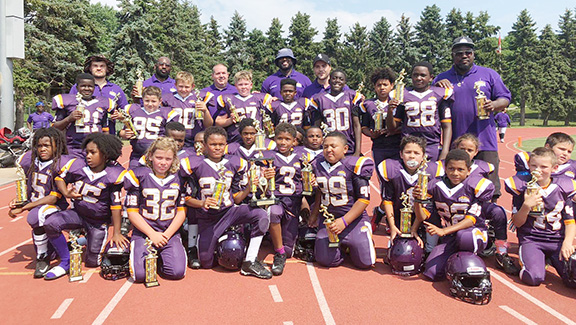 Sixty players from three age groups from the Scarborough Thunder Football program have been invited to play in the Pro Football Hall of Fame World Youth Championships in Canton, Ohio this December. Photo: Submitted.

Young players from the Scarborough Thunder Football program will be in the spotlight next month when they play in the Pro Football Hall of Fame World Youth Championships in Canton, Ohio.

Canton is the home of the Pro Football Hall of Fame, and the championships will be played from Dec. 11–15.

The event will include top youth football teams mostly from the U.S.

While inspirational for young players dreaming to one day to play professionally, this event is also a big honour for the Thunder football program, now in its 25th year, as they are one of only two international participants playing in Canton this year.

“As far as football goes, they will be playing some of the best-of-the-best talent,” said head coach and Scarborough Thunder president Roberto Allen.

For Allen, known as ‘coach Bubba’, the Hall of Fame tournament is a learning opportunity for the kids, most of whom are pursuing a scholarship in the U.S.

“They will see themselves matched against the best kids in their age group, so they will know exactly what they need to improve after coming back.”

Invited to the tournament for the second straight year, Scarborough Thunder will be represented at the event by around 60 kids in three age groups: Bantam (14U), Peewee (12U) and Atom (10U).

Television network CBS will be featuring the Thunder leading up to the trip, and will be at practices to cover the teams.

Most kids are driving down with their families, while some will be chaperoned by the association.

A GoFundMe page has been set up to bring costs down for parents travelling to Ohio since family expenses are not covered.

“We are trying to make it as affordable as possible so every player on each team can attend,” said Allen.

Coach Bubba sees his pupils making a career in pro football a realistic prospect. “We have some kids in the association that can definitely operate at the next level.”

Allen also reinforced that football is ultimately a team sport that builds life skills such as self-discipline, hard work, and teamwork.

“It’s not everybody who comes to the program that will get a scholarship, but even for those who don’t make it and come away from football, a lot will succeed as a family person and professional.”

Actively involved with the association since the beginning, from player, to young coach, then to board member and president, Allen highlights how Scarborough Thunder has positively impacted the community by providing sports opportunities for kids.

“We have a lot of kids with hard luck coming through the program, some them have really no parental involvement.”

With more than 200 youngsters playing all year round, Scarborough Thunder strives to support kids from all means. “We never turn kids away, especially for financial reasons. We are always looking for different ways to help them financially, to provide these kids with a place to play football.”

The GoFundMe page for the trip to Canton can be accessed at http://bit.ly/ThunderCanton