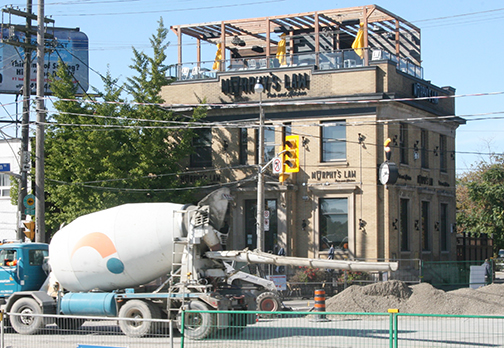 Murphy's Law made the best of the construction this fall at Kingston Road and Queen Street East. Photo by Bernie Fletcher.

“Anything that can go wrong will go wrong.”
(Old adage of Murphy’s Law)

Things have gone wrong lately for traffic and businesses near the corner of Kingston Road and Queen Street East. Some say we only have two seasons: construction and winter.

The stars have aligned right for the ground-breaking CBC show Kim’s Convenience which filmed scenes at Murphy’s Law Pub and Kitchen this past summer before all the streetcar track work started. (Queen streetcars will resume service to Neville Park Loop on Nov. 24.)

Kim’s Convenience returns in January for its fourth season of gentle humour. In a case of life imitating art the actual Moss Park area store shown in the opening credits (at 252 Queen St. E.) has changed its name from Mimi’s Variety to Kim’s.

The series has many fans in South Korea where it won Most Popular Foreign Drama at the 2019 Seoul International Drama Awards.

Simu Liu plays the wayward son Jung. Back in 2012 he was laid-off from his accountant job in Toronto and turned to acting. Now that Liu has landed the lead role in the upcoming Marvel superhero flick, Shang-Chi and the Legend of the Ten Rings (2021), he may be crunching some big numbers soon enough!

A Lion and a Horse

Long before you could drink your Guinness at Murphy’s Law Pub the historic building was a branch (circa 1912) of the staid Imperial Bank of Canada.

Other old bank buildings along Queen Street East have been repurposed as stores and restaurants. The Stone Lion at Queen and Kenilworth Avenue was once the Bank of Toronto (circa 1950) where a beautiful horse galloped past a startled teller’s window in filming for The Black Stallion (1979).

Toronto doesn’t have an iconic movie diner like Katz’s Deli in New York where When Harry Met Sally made the line, “I’ll have what she’s having” famous, but we do have the “Goof” (Garden Gate Restaurant at Queen and Beech Avenue) where a number of movies have been filmed including Frequency, Angel Eyes and Murder at 1600.

Recently a reader asked me where the real eatery in Private Eyes is located. The “Red Bird Diner” is actually Sauvignon, a French restaurant at Queen and Rainsford Avenue.

Near Queen and Coxwell, the Tulip hosted filming for 54 (1998) with Scarborough’s Mike Myers. Farther west you can try Bonjour Brioche at Queen and DeGrassi Street where everything started going wrong for the lead character in The Handmaid’s Tale. Orphan Black filmed scenes all along Queen Street East, including at the car wash behind Murphy’s Law.

In a big city, change is a constant. We have to go with the flow.

The next time you stumble upon those rows of big, orange cones along Queen Street East, let’s hope it’s just for filming.

The good folks at Murphy’s Law have been going with the Guinness flow by asking “Endless Construction Got You Down?” and offering a “Hard Hat Happy Hour”.

Three cheers for helping local business stay afloat when “anything that can go wrong will go wrong!”