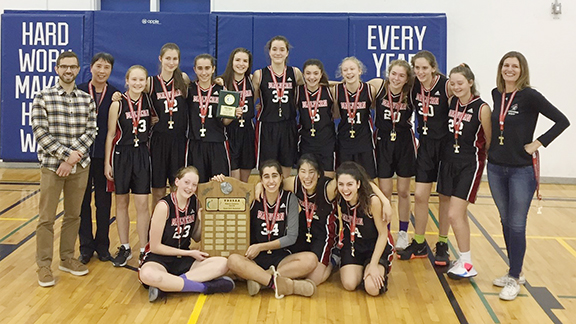 The Malvern Collegiate Senior girls basketball team made it to the final game of the city championships held last week at Ryerson University.

To qualify for the city’s, Malvern won the South Region title with a thrilling 51-45 overtime victory against East York Collegiate. In that game, Malvern was led by Dina Lojpur and Lauren McKinley with 16 points each. Lojpur also scored a key three-pointer in overtime, and Christina Sigalas and Pascale Sam-Foh put in huge defensive efforts in that game.

It marked the first South Region Tier 1 title for Malvern Senior girls basketball since the TDSB was created as part of Metro Toronto’s amalgamation in the late 1990s. Since that time, the South Region Tier 1 championship has only been won by Eastern Commerce, Jarvis Collegiate and Northern Secondary, so the Malvern girls made some history this season.

At the city championships, Malvern beat Scarborough’s R.H. King Academy 51-38 in the semifinals to qualify for the title game against Richview. In the semifinal, Dina Lojpur lead Malvern with a game-high 24 points.

During the regular season, the Malvern girls notched a record of 17 wins and four losses.

“The girls were extremely dedicated all year and always came to practice and games with a positive attitude,” coach Rafael Escobar told Beach Metro News.

“The girls on the team are not only phenomenal athletes but are also amazing students in the classroom and are all around good, kind people who are actively involved in the broader Malvern community. They are exceptional role models for all those around them.”