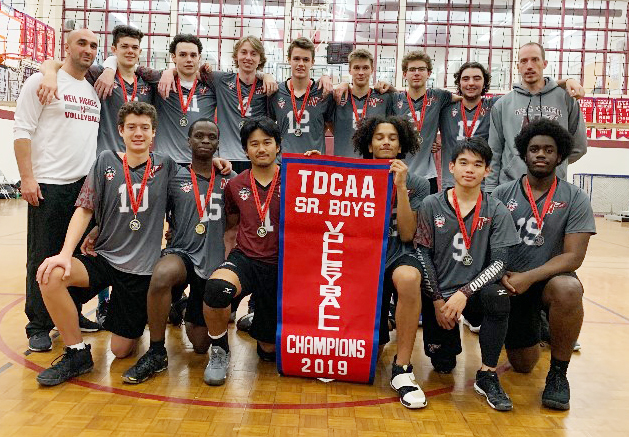 The win qualified the team for its fourth straight appearance at the Ontario Federation of School Athletic Associations (OFSAA) championships that were held in late November in Scarborough.

To qualify for OFSAA, the Maroons beat Etobicoke’s Monsignor Percy Johnson Catholic High School 3-0 at the city championships on Nov. 5. That win also wrapped up a fourth consecutive undefeated season for the Neil McNeil boys in TDCAA league play.

The Maroons then headed into the OFSAA AAA championships ranked fourth among the 20 competing teams.

The next day, the Maroons faced Georgetown District High School to see if they would continue through to the championship round pool and play in the quarterfinals.

In the best-of-five quarterfinal, the Maroons faced Mississauga Secondary School (winners of the 2016 and 2017 OFSAA championships and bronze medalists in 2018). The Maroons started slowly, dropping the first two games before bouncing back to win the next two and set up a decisive fifth game. That contest went back and forth but Mississauga eventually won 15-13.

Overall, Neil McNeil finished fifth overall at the OFSAA championships. It was their fourth straight Top 10 finish in the province.

“Being down 0-2 in sets and 7-13 in the third can be disheartening but the boys showed some real resilience to come all the way back to force a fifth set. I was especially proud of the Grade 12s as they stepped up in a big way.”