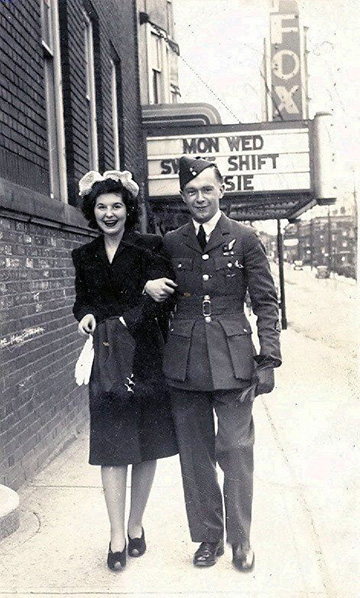 Above phoro, Betty Archer and Edgar Dorsey on their engagement day in May of 1944 outside the Fox Theatre on Queen Street East. First inset photo, Edgar was a rear gunner on a R.C.A.F bomber. Second inset photo, Betty and Ed’s granddaughter Chloé Dewhurst and her husband recreate the photo on their wedding day in 2013.

The holiday season is a good time to count our blessings and reminisce about family memories. Old photos harken back to a very different era. How did life turn out for this smiling couple?

It was May 1944. The world was engulfed in war and the D-Day Invasion was only a month away. This wonderful photograph was taken on the day that Betty Archer and Edgar Dorsey became engaged. The Fox Theatre was playing Swing Shift Maisie about women working in the war industries.

A news article of May 2, 1944 welcomed Flying Officer Dorsey home on special leave after serving four years in Egypt, Tunis and Malta. Dorsey had the dangerous and lonely job of rear gunner on bombers. He received the Maltese Cross as a veteran of the “victorious African campaign against Rommel’s forces”.

“My dad signed up with the R.C.A.F, as he said he couldn’t swim and hated walking. He was sent to England after his training out West. Ed started his combat service as a “propeller”! Yes that is right, an airplane propeller. To be precise an air screw. Apparently, R.A.F Egypt needed 250 propellers or air screws as they called them, to repair their planes.

“When the request was decoded in London, an ‘s’ was dropped and 250 air men (air crews), Ed Dorsey being one of them, were put on a passenger ship and headed off to Cape Town, then to Cairo.When they arrived, everyone on the ship was wondering why they were coming out to get them with barges! Not sure if this is true, but dad said that the British never referred to propellers as air screws again.

“I believe he was assigned to a Halifax plane as rear gunner. Their job was flying no more than 50 feet over the Mediterranean, below German radar, looking for German shipping. Dad said they were so close to the water that they would get wet with spray. Once they located German ships, they would radio the info to HQ and then lead the torpedo bombers on a path that would be in line with the heaviest ships. Upon arrival, Ed’s plane would pull away and he and his crew would watch ‘the carnage unfold…on both sides’. “While stationed in Egypt, Ed and a buddy ate some grapes they found. They got dysentery and were grounded. That saved his life. The plane he would have been assigned to blew up on takeoff, only the pilot survived. Later in Ed’s first tour, he was stationed in Malta. During a flight over Messina the plane was hit with flak and it disabled an engine. The captain got on the intercom and told the crew to get their parachutes on and get ready to abandon ship, but on his orders. The co-pilot was hand-pumping oil to the hit engine and was keeping the propeller free spinning, preventing the plane from being pulled down. The captain then added that if that didn’t work they would get Dorsey up here, as he was a certified “propeller”. Talk about humour and grace under pressure.

“During his second tour of duty, he returned to Toronto and got engaged to my mom, Betty. The photo at the Fox Theatre was taken that day. Dad returned to his flights bombing Hamburg, targets on the Rhine and also Holland.

“Dad told me of times flying over Germany, in total darkness, unable to see the hundreds of planes around him. The only light would be from the flak in the air and unfortunately a bright flash and a loud bang as the plane beside you blew up. Other times they would be scared because they would see a German plane go flying past them at lighting speed, wondering “what the hell was that”. Later they found out the Germans had developed jet aircraft.

“Six flights after returning home, dad’s plane was shot down over Germany. All of the crew survived the parachute landing and all were captured. During their interrogation, the Germans kept asking ‘which one of you is Dorsey …where is Dorsey?’ The Germans knew of every airman we had flying over them.”

For his bravery Ed Dorsey was awarded the Distinguished Flying Cross.

In 2006 when “dad was in his last few weeks with cancer” his crew mate, navigator Sam Hearst would visit.

“He would spend his time holding Ed’s hand and giving him comfort. After my dad was gone, my mom wrote Sam and thanked him for looking after Ed in his time of need. Sam wrote back and said, ‘It was the least I could do for Ed after all the long, cold, lonely nights Ed spent looking after me.’”

Elizabeth (Betty) Archer (1924-2017) grew up on Hammersmith Avenue right down by the lake. Ed and Betty were married at St. Aidan’s Church in the Beach in May of 1945 and raised their family on Long Crescent in the 1950s.

A friend wrote on Facebook, “We used to bring Betty down to the Beaches where she would tell us stories of growing up here and in early years of marriage.” Granddaughter Chloé Dewhurst wrote, “My grandparents had a wonderful life together and loved this photo. My husband and I tried to recreate their engagement photo on our own wedding day in front of the Fox Theatre in July 2013.”

The Hot Docs Ted Rogers Cinema presents a free screening, with a donation to the Stop Community Food Centre, of A Christmas Story at 10:45 a.m. on Dec. 21. Parts of this now classic 1983 film were shot in Leslieville.

And speaking of movies and the Fox, our local police will sponsor the free movie for seniors at the Fox on Thursday, Dec. 19, at 10:30 a.m.