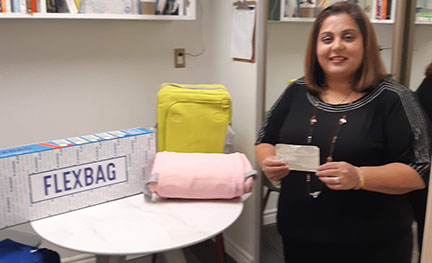 East York entrepreneur Anu Luthra with the FlexBag, which is now being sold by Walmart Canada.

Anu Luthra was a typical East York mom who worked in the financial industry before becoming an entrepreneur in 2013 by creating the company called Lumehra Innovative Products for Life of which she is the CEO.

As a mom, Luthra would pack her kids things in a van for the cottage or for trips, but couldn’t find anything that would organize and fit into the space just right. So she came up with a multipurpose bag called the FlexBag which she designed on a Post-It note.

It is made from neoprene scuba material that is extendable and comes in all kinds of colours.

“At the time my daughter was young so I needed something functional that could organize something in the way of packing in a car as well as take out as a diaper or laundry bag,” said Luthra.

She explained that as a child was always looking at things like toys and wondering how to make that better.

“When I buy something, I want to make sure that I can use it for multiple things and that was part of the driving force behind making sure that the FlexBag can be used as a portable organizer for the car or even a suitcase,” explained Luthra.

FlexBag was made for the busy parent in mind. It can be used on a family trip to the cottage or to soccer practice, she said.

The idea and need for the bag was so well received that Walmart is now selling it in Canadian stores.

Luthra said Lumehra was one of two Canadian companies asked to attend and feature their products at the International Home Show in Chicago recently. They were part of a section called inventors corner and through this experience, they were able to make the connection with Walmart Canada.

“They wanted a great product that can be used for so many things,” said Luthra of Walmart’s interest in the FlexBag.

“Plus the cover is removable and machine-washable. There’s nothing like this out on the market and I think they are big on supporting women entrepreneurs. When you have a company like Walmart that’s willing to take a risk on your product, that’s huge.”

Luthra’s advice for anyone who is considering becoming an entrepreneur that “it’s not something to jump into and it’s a tough road. The reality is it’s a lot of work. You have to really define what you want to sell and why your product or service is a necessity.”