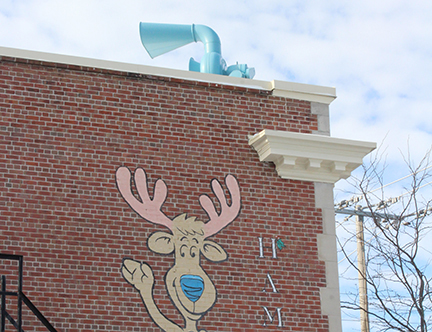 Community Centre 55 retains a reminder of the Cold War on its roof – an air raid siren. The building on Main Street, south of Gerrard Street East, was a police station from 1911 to 1973.

Old Beachers, mainly those who have been living for the past 60 or 70 years, will probably remember this is a part of our history that should not be forgotten ever. We have here in the Beach a monument that stands out like a beacon of light and freedom to countries like Canada.

Some will ask what is the Cold War? Well, dear young Beachers (and old Beachers), it began during the First World War when in 1917 there was a revolution in Russia where the Communist Party took hold of that country.

For the next number of decades it tried to overthrow other governments. During the Second World War, Russia was invaded by the Nazis of Germany. In the end, Russia along with Britain, France, Canada, the United States and other Allied countries won that war. But after it ended, the world had moved into the Atomic Age!

At the end of the Second World War, Russia occupied most of Eastern Europe by military might. There were no free elections in these countries and they were under the heel of the Russian military though they were called socialist republics. The name U.S.S.R. stands for United Soviet Socialist Republics, and all of it was ruled by dictator Joseph Stalin at that time.

The goal of the U.S.S.R. was world domination, but the Western Powers led by the United States tried to stop the Russian menace beginning in 1945.

The atomic bomb had been discovered and both sides had the power to used nuclear weapons. The Western Powers joined to form the North Atlantic Treaty Organization (N.A.T.O) against the U.S.S.R., and this was the beginning of the Cold War.

Former British Prime Minister Winston Churchill said in a speech in 1946 that “an iron curtain’ had fallen across the world, on one side the free world and on the other the Communist menace.

Both sides had developed planes that could drop atomic bombs, then later hydrogen bombs, on each other’s cities and countries. Later, both sides would develop atomic missiles, and we had the Cold War from 1945 to 1989.

There were threats of nuclear annihilation, the Korean War, the Cuban Missile Crisis, the Vietnam War and so on.
We had this great potential for disaster with country against country, and the deaths of millions of people if these nuclear weapons were used.

What should be done to protect people from such threats?

Cities around the world in the 1940s, ’50s and ’60s made plans, people built bomb shelters on their properties, governments built huge underground bunkers for their top political leaders.

Canada was no exception to this. We were under threat from the Cold War for decades, and like other nations we ran drills just in case an atomic bomb was dropped on one of our cities. In Toronto we would have hid in cellars or subways or places of refuge from this if it happened.

But how would we know if an attack was coming so we could take shelter? Just like in the Second World War, we would use air raid sirens to warn people.

They were placed in strategic places throughout Toronto – on top of buildings where you would be able to hear them if they went off. So many of these air raid sirens stood on the ready for decades until they were no longer needed because the Cold War ended.

Most of these sirens became obsolete, as I said, and were dismantled. But not all of them my fellow Beachers.

There is one of these sirens still standing in a not-so-conspicuous place. You probably have passed by it numerous times and didn’t notice it.

The last air raid siren is now an historic site and it is sitting on an historic building. Where is it? It is located on the southeast corner of Swanwick Avenue and Main Street on top of the Community Centre 55 building.

How is it that this air raid siren was able to stay there? Many years ago, Bob Murdoch who was the then executive director at Community Centre 55 had a great idea. He said to me, “Gene, we have the old air raid siren on top our building. Should we keep it?”

We agreed that the answer should be yes. This silent air raid siren stands in tribute to the end of the Cold War in honour of not only all our veterans but to all freedom-loving people in Canada and the rest of the world.

There is not another air raid siren in East Toronto that I know of. It is an historic object reminding us of the value of our democracy, the Canadian way of life and freedom.

Peace on Earth. Goodwill to all and Happy New Year! Historically yours!