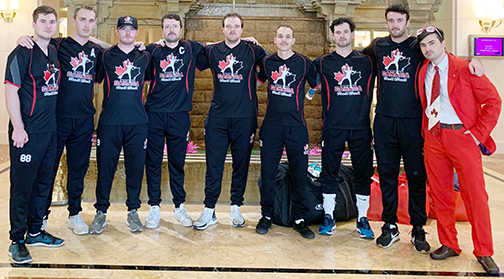 Members of the Canadian roll ball team, which included a number of former Malvern Collegiate athletes, put in a strong showing at the recent Roll Ball World Cup in India. Photo: Submitted.

Just two months before the Roll Ball World Cup in India began this November, a group of life-long friends that were about to represent Canada on the international stage didn’t even know what the sport was.

The unlikely journey started when a friend of the team, Sheik Hassan, had described the experience of playing roll ball for the Bangladesh national team at the previous World Cup.

He was now interested in putting a team together to represent Canada at the next championships. After explaining the game to Duncan Tooley, he suggested getting some friends together that would potentially be interested.

Roll ball is basically described as a combination of basketball and European handball played in a gym on roller skates. There are six players aside on the floor on each team, and the play requires the bouncing of the ball and passing as teams try to score into a net defended by a goalkeeper.

Tooley began to assemble a dream team of friends and teammates from hockey, most being from Malvern Colligate Institute, and convinced them on this new and interesting opportunity.

One member of this group of adventurous young men is James Neal-Ellis.

Neal-Ellis was on board and interested from the moment the idea was explained to him, but admitted that the transition to playing a completely new sport was not easy for the players.

Coming up against vastly more experienced teams in this tournament was a challenge that the Canadian squad knew they were always going to face.

The Canadian team’s first game against Egypt was a great learning experience and the intense atmosphere was something the team had never felt before. The playeres were able to kick on from there in the next three group games to secure the top seed in their pool.

“We had never played the sport and didn’t know what to expect, so the first game was pretty crazy,” said Neal-Ellis. “Going up against Egypt who we knew was strong team in front of all those fans was unbelievable.”

The Canadian team then advanced to the quarterfinals and played Senegal in a crucial knockout game. Despite their best efforts, Canada were sent back home after losing by a score of 5 – 1.

“We all really loved playing, we thought it was really fun. Of course, the challenge is that it’s not as big in North America. But in the future, we hope to continue playing for sure”

Considering the team’s relative skill level and lack of knowledge of roll ball going into the tournament, all of the Canadian players were extremely proud of how they performed in India.