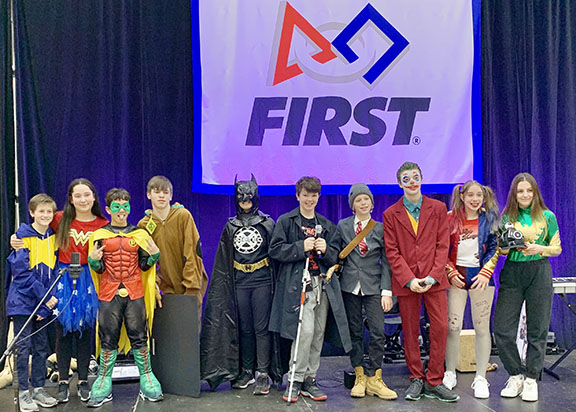 For the fourth year in a row the robotics team from Glen Ames Senior Public School has qualified to compete in an international tournament.

The team is made up of 10 Grade 8 students from the school. They presented their championship project to the entire audience at the provincials (held at Durham College in Oshawa) and on a live-stream shown around the world.

The FLL is an international alliance which challenges students from schools around the world to come up with solutions to real-world challenges by using Lego Mindstorms technology. FIRST stands for For Inspiration and Recognition of Science and Technology.

The challenge this year was City Shaper, which asked students to help plan an optimal future for cities using technology.

Team X-Sighted DC’s project was called the ISight 360. It helps make navigating cities easier for people who are visually impaired.

As part of its presentation, the team members called on more than just their robotics skills. They took on the personas of superheroes from the DC universe and also highlighted their musical talents as part of the presentation.

Due to their strong showing at the provincial championships, the X-Sighted DC team now has the option of attending an international tournament in either Detroit, South Carolina, Arkansas or Greece later this year.

They have also been asked to take part in the Ontario Innovation Celebration at Seneca College in February where the top robotics projects in the province are showcased.

Also competing at the provincial robotics championships in Oshawa was the team from The Cube School of Technology on Gerrard Street East.

Called Team No Signal, they presented a project on dealing with greenhouse gases produced in homes.

Team No Signal won an award for their presentation at the provincials, but did not qualify to go on to international competition, said team spokesperson Zara Subharwal Lakhera.

“We finished in the top 10 for our robot runs and are quite satisfied with our finish,” she said.

EDITOR’S NOTE: This story has been updated from the original to include results from the team representing The Cube School of Technology.