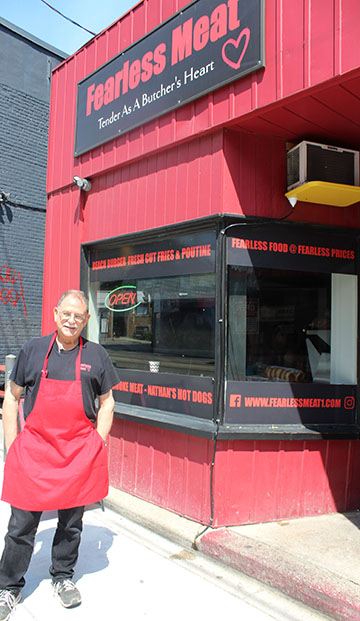 Owner David Brown in front of Fearless Meat on Kingston Road. The restaurant celebrates its second anniversary this month.

David Brown, owner of Kingston Road restaurant Fearless Meat, celebrates the success of his business as the second anniversary of its opening approaches on Sunday, Jan. 19.

Brown brings his love for meat to the Beach community through a menu featuring a plethora of specialty burgers.

Brown attributes the success of his business to the philosophy guiding the brand.

Besides quality food and reasonable pricing, Brown also refers to the restaurant’s slogan, “Tender as a butcher’s heart.”

“Butchers have a long tradition of giving back to the community. I’ve been a butcher for almost 50 years and it’s a tradition that I’ve always taken very seriously,” he said.

Brown said that he has done a number of charity events in the past, and plans to spearhead many more in the future.

Brown said that he likes to give back to the community in a number of ways, including doing hands-on classes for the public in his restaurant to teach skills including barbecuing and turkey carving.

“We also have free coffee and ice cream all the time for our first responders, and for veterans and their spouses,” said Brown.

Despite Fearless Meat’s success, a string of businesses in the Beach neighbourhood have closed in the last year.

The recent closure of local grocery store Meat on the Beach and restaurant The Tulip prompted Brown to propose the idea of forming the Beach Culinary Guild.

“It’s quite a shock for the community. And I was just thinking what can we do with our community to stop that (closures) from happening and strengthen the culinary community in the Beaches,” he said.

Brown said that it would be a volunteer-based organization dedicated to creating fun culinary experiences, and to inspire people to buy locally and to continue dining in the Beach area.

Brown organized the first meeting to discuss the prospect of a Culinary Guild at Fearless Meat on Jan. 12.

“I was thinking that there are a lot of partner groups that we could get involved like retailers such as grocers or specialty food shops, restaurants coffee shops, bars,” he said.

He also said that patrons and people who want more great food in the Beach, event planners,  along with getting the word out about the guild through publicity, word of mouth, and Facebook groups would be helpful.

“Associated businesses and groups, especially the other Beach businesses, willing to partner would make our culinary events and businesses even more successful,” said Brown.

He also believes that food critics are important to the process. “They can provide recommendations and suggestions on how to make our culinary businesses and our culinary events the best in Toronto.”

Brown said he would hope to get a board of directors together to do some fundraising events to have some operating capital for the guild.

He has already begun to think about the type of events that the Beach Culinary Guild could host, including his idea of a huge beach party.

His ideas for events on the smaller side, he said there could be similar events to the classes he runs at Fearless Meat, like tastings or how to cook various meats.

Brown said that there are many great restaurants and other businesses in the Beach.

“When I started up my restaurant two years ago, I made a point of going along Kingston Road and introducing myself. These businesses are great, and a lot are small businesses are passionate about what they do and they have so much knowledge about their products and services,” he said.

Brown said that he is grateful to the community for supporting Fearless Meat and helping them reach the two-year mark.

“That’s quite a milestone for a lot of restaurants. We’re really happy to be a part of the Beach, and we’re looking forward to being a Beaches restaurant for a long time and doing great things for our community,” said Brown.

For more information about Fearless Meat, visit their website at https://www.fearlessmeat1.com/