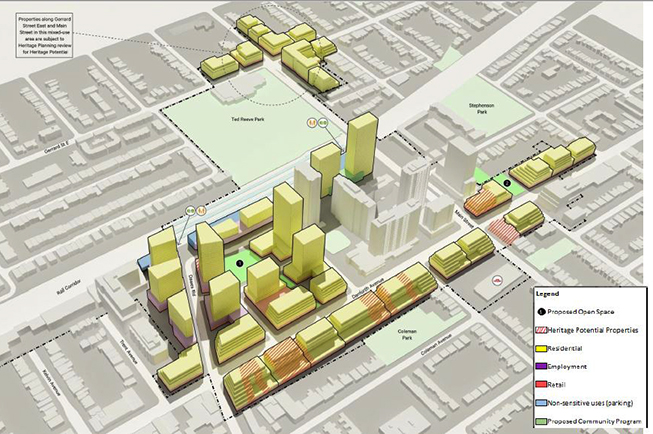 Development proposals and building guidelines for the Main Street Planning Study are shown in yellow. Inset photos show some of the proposed building heights and where they are located in relation to the study area around Main Street and Danforth Avenue. Inset photos also show the view looking south on Dawes Road from Danforth, where a number of highrises are proposed.

The Main Street Planning Study has been approved by Toronto Council, and if there’s one major take-away from the report, it’s this: Growth is coming to the area.

This City of Toronto finalized report comes after a series of studies carried out by a third-party group, SvN Architects and Planners, hired by the city.

The study area is bordered by Main Street to the west, Danforth Avenue to the north, Dawes Road to the east and Gerrard Street East to the south, with the total surface area spanning approximately 26 hectares. • A 27-storey mixed-use building (retail, condo and rental space) at 276-294 Main St. (at Stephenson Avenue). The application was approved by the Local Planning Appeal Tribunal (LPAT) after a settlement offer was accepted by Toronto Council in February 2019.

• A 10-storey building at 2494 Danforth Ave. (at Chilsolm, just west of Main Street on the north side of Danforth), proposed as a seniors’ assisted living that incorporates retail uses on the first and second floors. The proposal also includes a four-storey rental apartment building to the rear of the site.

• Two rental apartment buildings of 15 and 32 storeys apiece at 2575 Danforth Ave. (at Main Square). These buildings received zoning approval in 2003 and are currently under site plan review.

• A mixed-use building containing two towers at 24 and 30 storeys located at 9-25 Dawes Rd. Resident concerns regarding tower heights were reported on by Beach Metro News on Sept. 27, 2019. ( https://www.beachmetro.com/2019/09/27/heights-of-proposed-towers-for-dawes-road-development-plan-have-area-residents-concerned/ )

• Three residential towers standing at 49, 46 and 40 storeys, including a six-storey community centre at 6 Dawes Rd. (at the southern tip of Dawes Road just north of the Danforth GO station platform).

The city’s Site Area Specific Policy (SASP) requires that a minimum of 25 per cent of the units must contain two-bedrooms and 10 per cent, three-bedrooms in each development application.

To date, none of the development applications have been approved by the city.

“We exist in a tribunal planning framework, which means that the province is dictating that density will be delivered around where we have transit access,” said Beaches-East York Councillor Brad Bradford in response to the slew of proposed developments in the area.

“We want to bring employment, investment, jobs and growth to the area that will help support our local businesses and create a really vibrant neighbourhood and we do that through employment and non-residential uses.”

According to the study, the approved “height peak” in the study area is based on the tallest approved building, being the 32-storey building at Main Square (at 2575 Danforth Ave.).

From there, buildings are to have appropriate downward transitioning in height so as to not impact light, views and privacy.

“Height is going to be something that we discuss through the review of the applications,” said Toronto City Planner George Pantazis.

To establish guidelines on building heights, the study area was subdivided into three sections. Those sections are:

Character Area A – Located along Danforth Avenue, the proposal at 2494 Danforth Ave. falls in this area. The SASP generally permits midrise buildings of seven to eight storeys, but as per the report, this development may be permitted if a dedicated floor of office space is included in the proposal.

Character Area B – Located at the intersection of Main Street and Gerrard Street East, the city designated this section of the study as “mixed-use”, and is sanctioned for low-rise and mid-rise development.
According to the report, development of high-rise buildings is barred from this area due to adverse impacts to light, view and privacy for the surrounding residential neighbourhoods.

Character Area C – Bordered along Main Street to the east, Danforth Avenue to the north, Dawes Road to the west and the East Toronto Athletic Field and rail corridor to the south, the city envisions this area for slender, point-form towers. The applications for 276-294 Main St., 10-30 Dawes Rd., 9-25 Dawes Rd. and 6 Dawes Rd. fall under this area.

The city’s rationale here is this area includes large parcels of land and does not immediately abut areas designated as residential neighbourhoods. This land already includes the approved 32-storey building at Main Square (2575 Danforth Ave.).

The character areas were massed based on these three criteria:

• The building fits within the existing and planned context.

There are also a number of new street and mid-block connections included in the study in order to improve access to transit and major roads. The 20-metre wide street, known as the Dawes Road Extension, will connect Danforth Avenue to Dawes Road.
New private lanes in that area are slated to be 12 metres in width, which, the city says, will provide adequate space for parking and loading.

There is also a Preferred Park Location which will be in the area where the Canadian Tire on Danforth Avenue, between Main Street and Dawes Road on the south side, is presently located.

Given its frontage on the proposed Dawes Road extension and Danforth Avenue, the city identified the lot C as the preferred location for a new public park in the area.

There are no immediate plans for Canadian Tire to move out of the area, however. The ultimate determination of the park location will depend on successful development applications, along with a city review and a public consultation process.

The Main Street Planning Study was initiated by the City of Toronto in response to the Province of Ontario’s policies and strategic framework to direct growth and build “complete communities” in areas that are within a five to ten-minute walk of transit infrastructure. In this case, the study areas are in close proximity to the Danforth GO and Main Street subway stations.

The following five Guiding Principles were incorporated into the Main Street Planning Study, and are based on the province’s Official Plan Policies:

• Bolstering a local and competitive economy.

• Supplying a range of housing options.

Questions or comments regarding the Main Street Planning Study can be directed to City of Toronto planner Pantazis at george.pantazis@toronto.ca or by calling 416-392-356