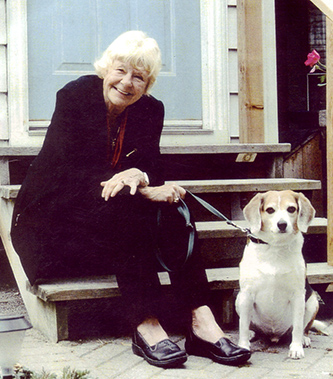 Butler Swan died at the age of 83 on Dec. 29, 2019 at Michael Garron Hospital after a long struggle with a severe illness.

She was a “legend” in the Beach for her work for her support of the arts, volunteering and for starting Bard in the Park, wrote friend Norma Cassidy

“She had a quick wit and ‘did not suffer fools gladly,’ as Shakespeare would say,” wrote Cassidy.

“She encouraged many young people with her love of Shakespeare.”

Butler Swan came to Canada from England in 1957, and lived for decades in the Beach.

She was a graduate of the London School of Dramatic Art in the early 1950s, and performed with several repertory companies before making her debut in London’s West End in Kismet.

After arriving in Canada she performed in theatres from coast to coast.

In a 2011 interview with Bill MacLean from Beach Metro News, Butler Swan recounted her early years of acting once she arrived in Canada in 1965.

She joined the Canadian Players, the winter touring company of the Stratford Festival Theatre.

Butler Swan had lead performances with The Shaw Festival in 1965 in Pygmalion and The Millionairess.

“During one of the performances of Pygmalion, the set began to fall down during one of my speeches,” Butler Swan told MacLean. “I had to hold it up with one hand while I continued with my lines.”

She also performed in South African playwright Athol Fugard’s production of A lesson from aloes in 1979 in Montreal.

Butler Swan was a multi-talented actress who performed on stage, screen and radio, wrote Cassidy.

“Truly. All the world was her stage. A bright and shining star has been extinguished. She will be missed by all in the Beach and beyond,” wrote Cassidy.

In 2011, Butler Swan was honoured as Beach Citizen of the Year.

In the nomination for the award it was noted that she had “been a contributor of the Beach for many years. She has used her considerable theatrical skills and experience to teach, direct, produce drama, to entertain and to raise funds, most often as a volunteer and always as an enlivening element in the neighbourhood.”

In 2004, she started the Bard in the Park Shakespeare festival which produced free performances in Kew Gardens.

She taught acting classes for kids and also volunteered at Community Centre 55 in numerous ways.

“She did so much for the kids and for the community. We’ve lost someone special,” he said.

Butler Swan also served on the board of the Canadian Actors Equity Association for 10 years and was its vice-president for two years. She was chair of the Theatre Arts Ball for 14 years raising money for the Actors Fund of Canada for sick and destitute performers.

Wife of Jim and grandmother to Alex, Butler Swan was predeceased by her son James.

Donations may be made to Providence House or a charity of choice in her remembrance.