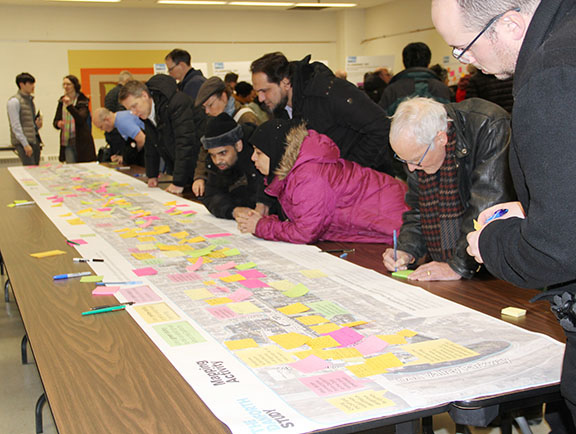 Residents look at a map of Danforth Avenue from Broadview to Victoria Park, and write comments on sticky notes, during a Danforth Study open house recently. Photos by Nina Rafeek.

The second Danforth Avenue Complete Street and Planning Study community meeting drew a massive crowd of approximately 300 people who came to learn more about the project and have their say at the open house-style gathering held recently at Monarch Park Collegiate.

As the City of Toronto is still in the very early stages of planning development of the area, the purpose of this meeting was to bring residents up to speed on the Terms of Reference of the Area Profile Report, and to report back on community feedback gathered from the first community meeting in November 2019.

The city outlined the Terms of Reference as a comprehensive guide to the study which are:

At the Monarch Park Collegiate meeting on Monday, Jan. 27, residents also had a chance to have their say by writing down comments on sticky notes and placing them on a blown-up version of the six-kilometre street map representing the study area.

Georgia Koumantaros, 22 wants to see stricter regulations around purchasing semi-detached two-family homes and combining them into a larger one-family home.

“There’s not enough space, it’s not a sustainable way to live, and for people like us, where are we going to live?” said Koumantaros.

“Big picture of what we want to see come out of this meeting is we don’t have to someday leave our home, simply because we can’t afford it,” added Anik Watts, 21.

“We both lived here our whole lives, and I would love to live here for the rest of my life, but the only reason I wouldn’t is because I can’t, because it’s so unaffordable […] we can’t just only have rich people living in a neighbourhood, that’s really messed up,” she continued.

Delia Jacobson, who lives in the Danforth and Coxwell, area wants to see increased density, walkability and bikeability to “make this feel more like a community,” she said.

“Where’s the traffic going to go with the new bike lanes, and where are people going to park?” asked Trudy Van Deven.

Also a Danforth and Coxwell area resident, Van Devan said that while she understands the need for bike lanes for cyclist safety, she’s concerned about the disruption around the flow of traffic and parking, pointing to the complaints about the Woodbine Avenue bike lanes as an example.

Gideon Forman, Climate Change and Transportation Policy Analyst at the David Suzuki Foundation, said Danforth residents would do well to look at the Bloor Street Bike Lanes for answers to concerns about parking and traffic flow.

The Terms of Reference for the Economic and Retail Study from Broadview Avenue to Victoria Park are:

Sheilah O’Connor, who lives in the Coxwell and Danforth area, wants to see more small business in the empty stores. Having attended the first meeting, O’Connor said that she’s pleased that the city listened to what the residents said after reading community feedback.

Feedback from the last meeting can be found at the https://www.toronto.ca/wp-content/uploads/2019/11/983f-CityPlanning_DanforthPlanningStudy_Presentation.pdf

A third community meeting on the Danforth Complete Street and Planning Study will take place in the spring (date to be announced), along with an online survey.

There will be a total of six community meetings for this planning study.