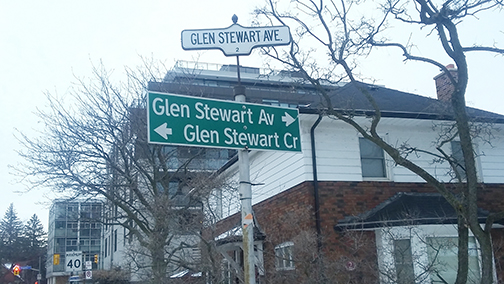 When it comes to permit parking, all streets in the Beach should be treated equally, say a group of residents from Glen Stewart Crescent. Photo: Submitted.

When it comes to On-Street Permit Parking why were some Beach streets more equal than others?

In the spring of 2017, then Beaches-East York Councillor Mary-Margaret McMahon asked herself this very same question and persuaded her fellow Toronto and East York Community Councillors to level the playing field.

This allowed permit parking on all residential streets in the ward, not just the 90 per cent which were already over crowded.

This courageous step enabled several of our tenants in our multi-residential former mansion to finally park on our own 50 metre frontage on Glen Stewart Crescent.

Prior to 2017 we were forced to park cars on Glen Stewart Avenue, narrower, more crowded. Often we had to find a spot hundreds of metres away, at night or in winter weather and across busy Southwood Drive.

But the Council ruling had bypassed polling of the residents. In the past this had enabled the more privileged Beach venues to keep cars of non-neighbours off their frontages – most having ample parking on site.

Years earlier when we were polled, Glen Stewart Crescent was deemed to be a separate polling region from its eastern continuation Glen Stewart Avenue. So the outcome was a foregone conclusion!

Now incoming councilor Brad Bradford seems to be contemplating re-opening this can of worms and have these polls brought back in? We urge him to refrain from this.

Urban intensification and grey zoning will be essential steps to contain the urban sprawl, which in turn leads to still more grid-locked cars.

At 1.3 cars per household in Toronto (already in 2015) we need all the parking spaces we can get. On top of that, SUVs, vans and pick-ups are getting bigger and many households will be contemplating getting a second e-vehicle.

We all will need to pitch in on this problem and move more to car-sharing — like the younger generation. Meanwhile all available on-street parking must be shared evenly, wherever practicable.

Let us not divide over this issue.

We face the much more daunting challenge of climate change after decades of having had our public transit planning stalled!