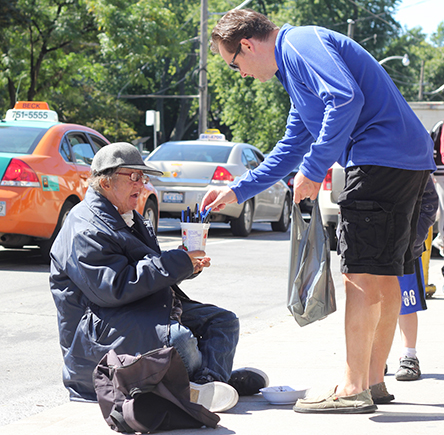 Wayne 'Hollywood' Joice is shown selling pens in the Beach in this Beach Metro News file photo. Joice died last week at the age of 60, and was remembered at a visitation and funeral service on Feb. 7.

Wayne “Hollywood” Joice was remembered at a peaceful visitation and funeral service surrounded by the ones closest to him on Friday, Feb. 7.

Joice, who died on Feb. 4 at the age of 60, was in a closed casket with red and white flowers on top of it, as he wanted.

At his visitation held at the Cardinal Funeral Home on Bathurst Street, memories of him were swapped between chosen family while Hey Hollywood by Paul Quarrington played in the background.

Joice was born on Aug. 4, 1959. He was well known in the Beach community for selling pens at the corner of Queen Street East and Lee Avenue.

He was born prematurely weighing one and a half pounds, which resulted in his body never being fully developed. He was one out of 15 kids and sadly the only one out of his siblings to survive and live a full life. One of his siblings lived to a year old, but the others died shortly after birth.

Joice’s father, who was blind, played a mouth organ outside of Honest Ed’s until he got an illness that made him stop and switch to selling pens. Joice followed his father in the pen selling business.

“I loved him like he was my son,” Joice’s childhood friend and caretaker, Pat Pypher said.

After Joice’s mother passed away, Pypher took full care of him. She took him to every doctor’s appointment, was with him during the times he went to the hospital and always made him feel included in her family and special events during the holidays as well as his birthdays.

“He was always a happy go-lucky fellow,” Pypher said.

“He never complained about anything, he never asked ‘Why me? What did I do to deserve all of this?’ He was always sick, was born sick.”

Over the years Joice had many health complications according to Pypher. He had pneumonia in 2013, having a tracheotomy and a kidney stent for his treatment.

Joice underwent kidney dialysis treatment and Pypher had donated her kidney to him.

It was Joice’s zest for life, heart-warming friendliness and love for Hollywood stars (often calling out to many Marilyn Monroe’s and Robert Redford’s) that captured the hearts of many Beach residents during the decades he sold pens in the community.

Joice’s last two years of life were difficult, as he had lost his hearing completely and it affected his balance. According to Pypher, if he would fall, he would pick himself right back up and was a “fighter.”

They would make signs and gestures for him so they would be able to communicate.

As Joice was laid to rest on Feb. 7, in his coffin with him was his cup with the pens inside of it.