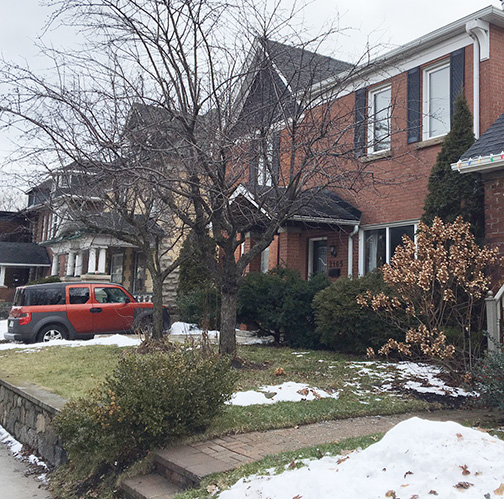 A proposal calling for three townhouses and laneway suites at the site of this single family home at 2165 Gerrard Street East is in the very early stages.

A proposal to tear down a large single-family home on Gerrard Street East and replace it with three townhouses and laneway suites has some residents in the area raising concerns.

The proposal for 2165 Gerrard St. E. (on the south side between Norwood Road and Main Street) is still in the very early stages, but the developer has already met with some residents regarding the plan.

“It’s important to recognize that there’s been no application submitted for this yet,” Beaches-East York Councillor Brad Bradford told Beach Metro News in a recent interview.

It calls for severing the existing lot at 2165 Gerrard St. E., which has 50 feet of frontage, into three lots for townhouses and two-bedroom laneway suites at the rear.

The suites would be located on the as yet unnamed laneway that runs behind five houses southeast of Norwood Road.

According to the P & R Developments website, the “project includes three townhouses, each with a pair of two-bedroom apartments and two-bedroom laneway suite at the rear. In all there are nine suites in the development, each suite is over 1,000 square feet…each suite will have direct access to the street or lane, and six will have back yard space.”

Along with the increase in the number of units, some residents have also expressed concern about the lack of dedicated parking spaces in the proposal.

“All of this on a conventional 50-foot urban lot, replacing a single detached house,” said the P & R website.

“There is no car parking on site, however there is permit parking on nearby streets. A streetcar stop is a few doors down on Gerrard, Main GO station is a five-minute walk, and Main subway station is a seven-minute walk,” said the P & R website. “Bicycle parking will be included in the development.”

Councillor Bradford said the lack of dedicated parking is an issue that will impact the surrounding neighbours.

“The parking concerns are legitimate. Parking concerns need to be addressed,” he said. “I realize it’s on a transit line and probably not everyone will have cars, but some people will own vehicles.”

Another concern raised by residents in a letter to Beach Metro News was the health of a large red oak tree at the rear of the property by the laneway. A trench for a proposed foundation was dug near the tree, and residents were worried the roots of might have been damaged.

However, an arborist’s report provided to one of the residents by P & R seemed to indicate that no damage was done to the tree.

“The work we have done was exploratory and conducted with the intention of keeping the tree healthy and thriving for years to come,” said P & R in an email attached to the arborist’s report which the resident shared with Beach Metro News.

The laneway suites aspect of the proposal is also raising some concern among residents.

The City of Toronto only recently approved the building of laneway/secondary suites as additions to properties in an effort to increase available housing options.

Basically, laneway suites (or second dwelling units) allow property owners to build residential units at the rear of their property providing they meet the criteria set out by the city.

Those in favour of them say they will increase affordable housing stock significantly, while opponents worry about the impact they will have on the character of residential neighbourhoods.

Bradford said that the laneway suites bylaw is very clear on what the requirements are for approval, and if a property owner meets them then they have the right to build one.

As part of the proposal for laneway suites at the 2165 Gerrard proposal, a naming of the lane is also being considered.

One proposal put out for the name was Mary-Margaret McMahon Lane, in honour of the former Ward 32 Beaches-East York Councillor who played a role in getting the laneway suites bylaw passed.

“It’s an idea that’s being floated,” said Bradford of the laneway’s name.

Naming a laneway makes it easier when it comes to building of laneway suites, but is not mandatory, he said.

“Technically the laneway does not have to be named, but it absolutely makes for much better emergency access to have the laneway identified,” said Bradford. “It makes it a lot more straightforward and safer. We should do them right.”

In its proposal, P & R also highlights the high environmental standards that the project at 2165 Gerrard St. E. will be built to.

“This project will be developed and certified to the Passive House standard,” said P & R on its website. “This standard is characterized by an especially high level of thermal comfort with minimum energy consumption.”

Recognizing that this proposal will change significantly change what was a single-family home lot, Bradford said the developer has done a good job so far of communicating with the community.

“This is all on the table and they have reached out to the community,” he said. “It’s much better to be upfront with these plans…They are being very transparent and looking for feedback from the community.”