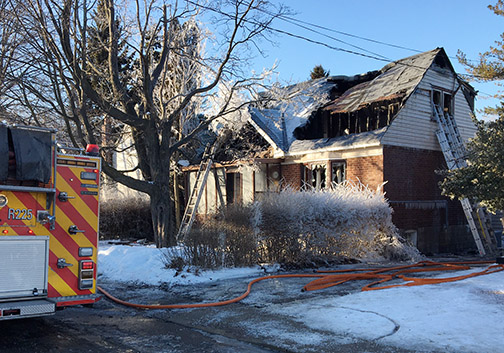 Ice can be seen covering a tree and shrubs in front of this house on Wolcott Avenue Friday morning. A three-alarm fire at the house on Thursday, Feb. 13, night saw a firefighter taken to hospital. None of the home's occupants were injured. Photo by Alan Shackleton.

A Toronto firefighter was taken to hospital for tests after being injured while fighting a house fire in the Danforth Road and Warden Avenue area Thursday night.

Firefighters were called to a house at 36 Wolcott Ave. at 8:13 p.m. on Feb. 13 for the fire which had started in an interior room.

When firefighters first arrived, they started battling the blaze from the inside of the house but a flashover forced them outside. A flashover occurs when flammable gases inside a building ignite.

“It was an interior attack, and then it flashed over and we pulled the crews outside and took up a defensive attack,” said District Chief Stephan Powell of Toronto Fire Services.

“It was very cold temperatures and we called for salt trucks as the water was freezing instantly,” he said. “It was very slippery and the high winds were fueling the fire once it got to the roof.”

On Friday morning, much of the street in front of the house still had a layer of ice as did a tree in the front yard and the roof beams.

The injured firefighter was taken to hospital for tests, but there was no further information on the extent of the injuries.

None of the home’s residents were injured.

The fire was a three-alarm response and included water from an aerial truck being sprayed onto the roof. It took about three hours to extinguish the blaze. Fire crews remained at the scene all night to monitor the situation.

Powell said the fire was currently under investigation and he could not speculate on a cause.