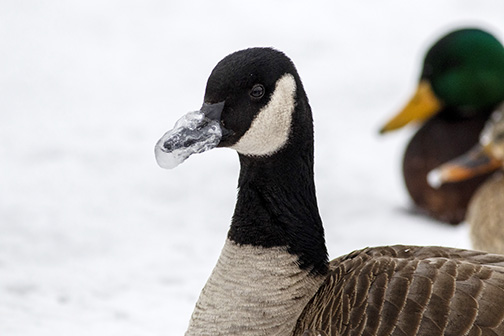 Cycles of warmer winter weather followed by deep freezes can be hard on water fowl, including this Canada goose which had a layer of ice frozen over its beak in 2019. Photo by Ann Brokelman.

What strange weather we are having. One day it is +5 and the next it’s -15! Does it do this every year, and we just forget?

I can’t prove this isn’t just my biased memory, but I honestly don’t remember it changing this dramatically when I was growing up.

Well, not only are the people feeling the cold on those negative degree days, but the ducks, swans and geese are definitely feeling it as well.

This story happened in 2019 but, with similarly strange weather happening already in 2020, please watch out for this happening again especially given the cold snap we just experienced.

Around this time, last year, Toronto experienced a particularly cold weather snap, with high temperatures barely inching above freezing. Warmer weather a few days earlier had perhaps convinced some birds to come further north, or delay their flight south, just a little too long. When the cold snap hit, a few birds found their beaks frozen shut, completely encased in ice, and unable to get free.

Fortunately for these particular birds, Judy Wilson, a local resident, saw the first Canada goose with ice on its beak and called me.

I went down to the park to check it out and then immediately called the Toronto Wildlife Centre to let them know what was going on.

In just the first few minutes I was there I saw five other Canada geese, and one mallard duck, with ice on their beaks.

Toronto Wildlife Centre’s head of the rescue staff said they were on their way as quickly as they could. I easily caught the first goose (don’t forget I’ve had training in this), and after placing a towel over the goose’s head, I moved him into Judy’s warm car.

Judy, who was helping by holding the goose to add some heat and keep it still, managed to pop off the ice beak in about 15 minutes. The beak fell off in one piece, (see the photo), and when TWC rescuers arrived they declared the goose healthy and safe to release.

They quickly worked at freeing all the other geese they could find and no birds had to be taken back for extra care.

The mallard duck really did not want to be caught, but managed to get rid of the ice himself with the added incentive of eating some of the corn I brought.

He was pecking at the corn on the ground with enough force, and frustration I’d assume, that his ice beak quickly split in two.

The next day I saw four trumpeter swans and one tundra swan in similar predicaments.

Remembering what the mallard had done, I placed corn in a heavy plastic bucket near them and they all broke free of their ice muzzles after a few pecks on the hard surface.

Is this unusual? If it’s happening here it must be happening elsewhere, but I didn’t have a lot of luck finding other examples online.

I did come across an article in China where they were having similar issue with swans, but that was about it. I have no idea why this happened but climate change is definitely a factor.

Thank you to all the people who watch out for our wildlife. If not for Judy Wilson, this goose may have had a different outcome.

By the way, the goose gave thanks to us for our efforts by pooping on Judy and on my car door.