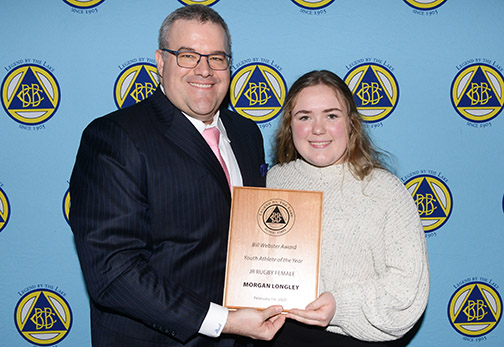 The Balmy Beach Club recently presented its Sports Sections Awards for the 2019 seasons.

The awards were presented during a gala event held at the club on Saturday, Feb. 1.

The young athletes were presented with Bill Webster Awards, which recognize local up and coming athletes under the age of 20.

The Webster award winners are chosen for their leadership, work ethic and perseverance.

“I am super proud to be a part of this evening and tradition,” said Statton.

“We have the opportunity to highlight the stars of tomorrow. These award winners have represented the Balmy Beach Club, the community and the East End on a local, provincial, national and international level.”

Longley is a Grade 11 student at Malvern Collegiate Institute. She has been involved with the Balmy Beach rugby team for several years, and is a leader on and off the field.

“She is a fierce competitor and her game has improved each season. She is constantly supporting and encouraging her teammates,” said Statton.

Ndukwe started playing rugby in Grade 9 at Sir Wilfred Laurier Collegiate Institute in Scarborough and for the Balmy Beach Club that same summer.

Over the last few years, Ndukwe has been selected to represent Balmy Beach as part of the Rugby Ontario sevens team touring Florida. He’s also been selected to play on the Canadian Misfits sevens team, and most recently selected to the U18 Canadian team playing against the United States in San Diego last month.

Wodehouse began kayaking in 2014 at the Richmond Hill Canoe Club. In order to take her training to the next level, she joined the Balmy Beach Club in 2018 to work with head coach Peter Martinek.

Wodehouse began her studies at Dalhousie University in the fall of 2019, and has been and continues to be an example of the Balmy Beach Club’s excellence in female athletics.

Low got his first taste of paddling at the Balmy Beach Sports Camp when he was just seven years old. He started racing competitively in 2013.

Last year, Low won gold at the national championships in U18 K1 1000m as well as silver in U18 K1 500m and senior K4 500m. Low competed internationally at the Brandenburg Cup in Brandenburg, Germany, finishing 4th in 1000m and 7th in 500m. He then went on to Romania where he finished third place in the B final. Low has since joined the Canadian National Team and will be training in Florida in a few weeks.

Low is in Grade 12 at Malvern Collegiate Institute and is said to be a huge fan of the Montreal Canadiens and the Saskatchewan Roughriders.

Also honoured at the club’s Sports Sections Awards night presentations on Feb. 1 were a number of adult athletes.

In Friday Night Hockey, Mark Would won the award which was presented by James Dann.

In Lawn Bowling, Cheryl Tredgett won the award which was presented by Carl Trinier.

In Old Boy’s Hockey, Steve Monaghan won the award which was presented by Tom McKellar.

In Paddling, Courtney Scott won the award which was presented by Eleanore McIntyre.

In Rugby, Kristin Bonomo won the award which was presented by Lisa De Sario.

In Squash, Susan Howatt won the award which was presented by Kinmond Smith.

In Volleyball, Britni Blackmore won the award which was presented by Michelle Quance.