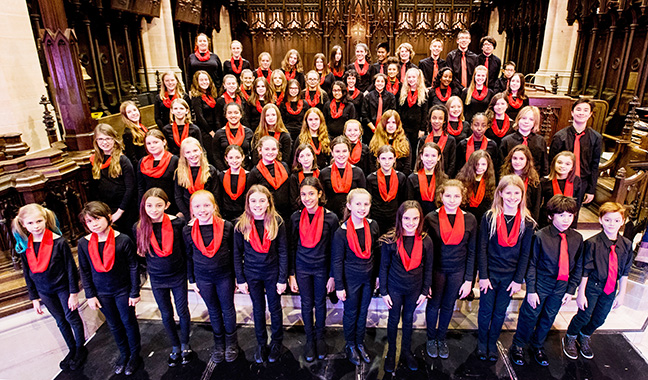 The Toronto Beaches Children's and Youth Chorus will be joined in concert by the Toronto Welsh Male Voice Choir on Saturday, Feb. 22, at Kingston Road United Church. Photo: Submitted.

The Toronto Beaches Children’s and Youth Chorus (TBCYC) will be performing in concert with the Toronto Welsh Male Voice Choir (TWMVC) on Saturday, Feb. 22.

The youth choir will be singing a variety of music ranging from folk songs to music that spans the globe.

The TBCYC was founded in 2006 by Bronwen Low and has more than 170 youth members from East Toronto.

Some of the choir’s past productions include Shrek Jr., James and the Giant Peach, Fame, Grease, The Wizard of Oz, H.M.S. Pinafore, Alice in Wonderland, Robin Hood, Oliver and Into the Woods.

They have also performed at Toronto City Hall Christmas concerts, the Distillery District’s Christmas Market, a joint concert with Cathedral Bluffs Orchestra and participated in tje TrypTych Concert Opera as members of the chorus for a production of Hansel and Gretel.

The choir’s upcoming events include singing with the Choeur des enfants de Montreal at the 2020 Earth Hour Concert in March, the GTA Junior and Senior Trebel Festivals during March and April as well as performing Anne of Green Gables and Hagbane’s Doom at the Berkeley Street Theatre in April and May.

The TBCYC is excited to be singing locally with the Toronto Welsh Male Voice Choir this month at Kingston Road United.

The TWMVC was founded in 1995 by Gwyn Roberts. While there are members who are of Welsh heritage, the choir is made up of singers from a variety of ethnic backgrounds.

They sing a blend of traditional Welsh music and contemporary music to appeal to a broad audience.

The TWMVC is always welcoming new members. They invite anyone who is interested to come down to their weekly Wednesday rehearsals at Dewi Sant Welsh United Church, 33 Melroes Ave., at 7:30 p.m.

For ticket information on the upcoming Feb. 22 concert, email the Toronto Beaches Children’s and Youth Choir at info@tbcyc.com or call 416-698-9864.

For more info on the chorus, visit www.tbcyc.com