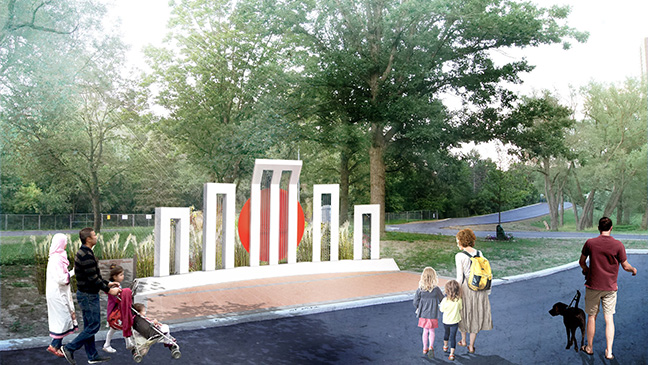 This artist's rendition shows what the International Mother Language Day monument planned for Dentonia Park might look like.

As International Mother Language Day (IMLD) is celebrated on Feb. 21, the Bangladeshi community in the Victoria Park and Danforth avenues area is working towards the building of a monument in 2020.

It had originally been planned by the City of Toronto to be built in Taylor Creek Park but after a meeting in December of last year, it was decided the monument will be built in Dentonia Park.

“This was a response to a request from the Bengali community who felt that Dentonia would be a more accessible and suitable location for the monument,” Beaches-East York Councillor Brad Bradford told Beach Metro News.

International Mother Language Day is an important celebration in Bangladesh and the Bangladeshi diaspora worldwide. On Feb. 21, 1952, four students in Dhaka were killed during a protest that Bengali speakers held. Bengali became a recognized language on Feb. 29, 1956.

IMLD was first celebrated on Feb. 21, 2000 to recognize the lives of the Dhaka students fighting for their language.

Plans with Toronto Council have been developing since 2012 to build a monument to commemorate IMLD.

“There is no construction activity at the moment. The design and plans for the monument itself still need to be finalized with staff in our parks department,” Bradford said. “The monument is being financed by donations. We had a big fundraiser in September where we smashed the fundraising goal. My goal has been to support this monument getting delivered in 2020.”

President of the local IMLD committee, Mak Azad, said they are still in the process of finalizing the design for the monument for Dentonia Park.  “We are hoping to start construction this spring 2020,” Azad said.

Everyone is welcome to attend the event. Refreshments will be provided.

To participate in the writing competition, please sign up online at https://goo.gl/zEgZLn