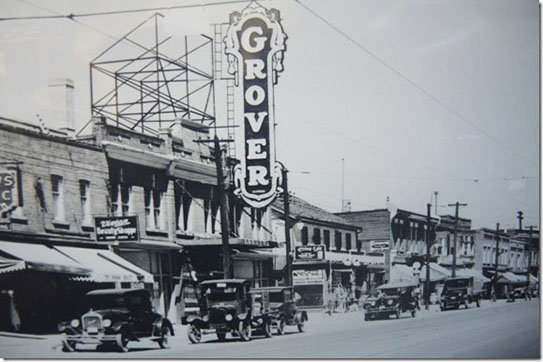 The Grover, shown in this City of Toronto Archives photo from the 1920s, was located on Danforth Avenue just east of Main Street. Inset photo shows a scene from 1988's Dead Ringers which was shot on Ravina Crescent.

Big changes are coming to the Danforth. By 2030 highrise towers may transform the area east of Main Street, but let’s take a trip back in time to a different era when the Danforth was known for its car lots, building supply stores and, yes, movie theatres.

The 1988 movie Dead Ringers opens with a title card that reads, “Toronto, Canada 1954” as twin boys walk past a horse and wagon down a typical Toronto street.

Can anyone remember the days when bread and milk were delivered daily by those horse-drawn wagons?

That scene was filmed on Ravina Crescent just south of the Danforth and west of Greenwood Avenue. It’s a trendy area now, but in 1954 it was a working-class neighbourhood.

For amusement people would go the movies in the evening, usually a double feature. Kids would attend Saturday matinees. There were nine movie houses on the Danforth. People could walk to their local “nabe” with no need to drive or head downtown.

After the Prince Edward Viaduct (a.k.a. Bloor Viaduct) was completed in 1918 the Danforth area began to boom.

Streetcar service went all the way out to the city limits at Luttrell Loop (near Victoria Park Avenue) where you could catch buses to the suburbs.
Movie houses sprung up to serve the favourite pastime of a growing population.

In 1954 the shimmering neon sign of the Grover Theatre lit the night sky on the Danforth just east of Main Street.

Like the Oxford (Danforth and Coxwell Avenue) the theatre took its name from the local telephone exchange.

In 1924 Grover became the first automatic dial telephone exchange in Canada and was located on Main Street just north of Kingston Road.

The Grover building now houses a Dixon Hall shelter. You can see the tall “fly tower” for theatrical rigging at the rear of the structure which suggests it featured vaudeville acts as well as silent films back when it first opened in the 1920s.

After the Grover closed around 1956 the building became a store, a revival hall and then big nightclubs like the Spectrum.

The Clyde Theatre at Luttrell Avenue also opened in the 1920s. It was a small, second-run movie house with only 403 seats. It became the Avalon around 1930, but did not survive past the mid-1950s.

I can remember seeing my first television set around 1954. TV would change the way people were entertained and spelled the end for a lot of smaller, local movie theatres like the Avalon.

In 1924 William Summerville opened the 1,200 seat Prince of Wales at Woodbine and Danforth avenues. His son Donald Summerville later managed the theatre before being elected in December of 1954 as alderman for our Ward 8. He became Mayor of Toronto in December 1962, but suffered a fatal heart attack in November of 1963 while playing goal in a charity hockey game. The Olympic -sized pool at the foot of Woodbine Avenue is named in his honour.

Back in 1954 Hurricane Hazel hit Toronto and the Yonge subway opened. Marlon Brando mumbled that he “coulda been a contender” in On the Waterfront. Judy Garland sang in A Star is Born and that year saw a White Christmas. Those twin boys could walk to their choice of movie theatres on the Danforth.

The Ace, Odeon Danforth and the Palace were all nearby at Pape Avenue. The Allenby (east of Greenwood circa 1936-1970) would find new life as the famous Roxy, today a Tim Hortons. The Century (opened in 1919 as Allen’s Danforth) at Broadview is now the Danforth Music Hall where Oscar-winner Chicago (2002) filmed scenes.

One by one the marquees disappeared with the popcorn and the laughter.

The theatres are all long gone, but the structures still stand.

The old Avalon sits empty and forlorn at Luttrell Avenue where busy streetcars and buses used to turn before the subway came along in 1966.
You can spot the building in Police Academy 4 (1987).

Most of the neon signs and car dealers are gone as well, but there is one reminder of forgotten days along the Danforth.

In 1959 Rick Mauran saw a future in hamburger joints, but had little money so he bought the old sign from a car dealership at Danforth and Gledhill Avenue that was closing. Mauran wanted to name his restaurant Humphrey’s, but he settled for the name on the sign…Harvey’s.