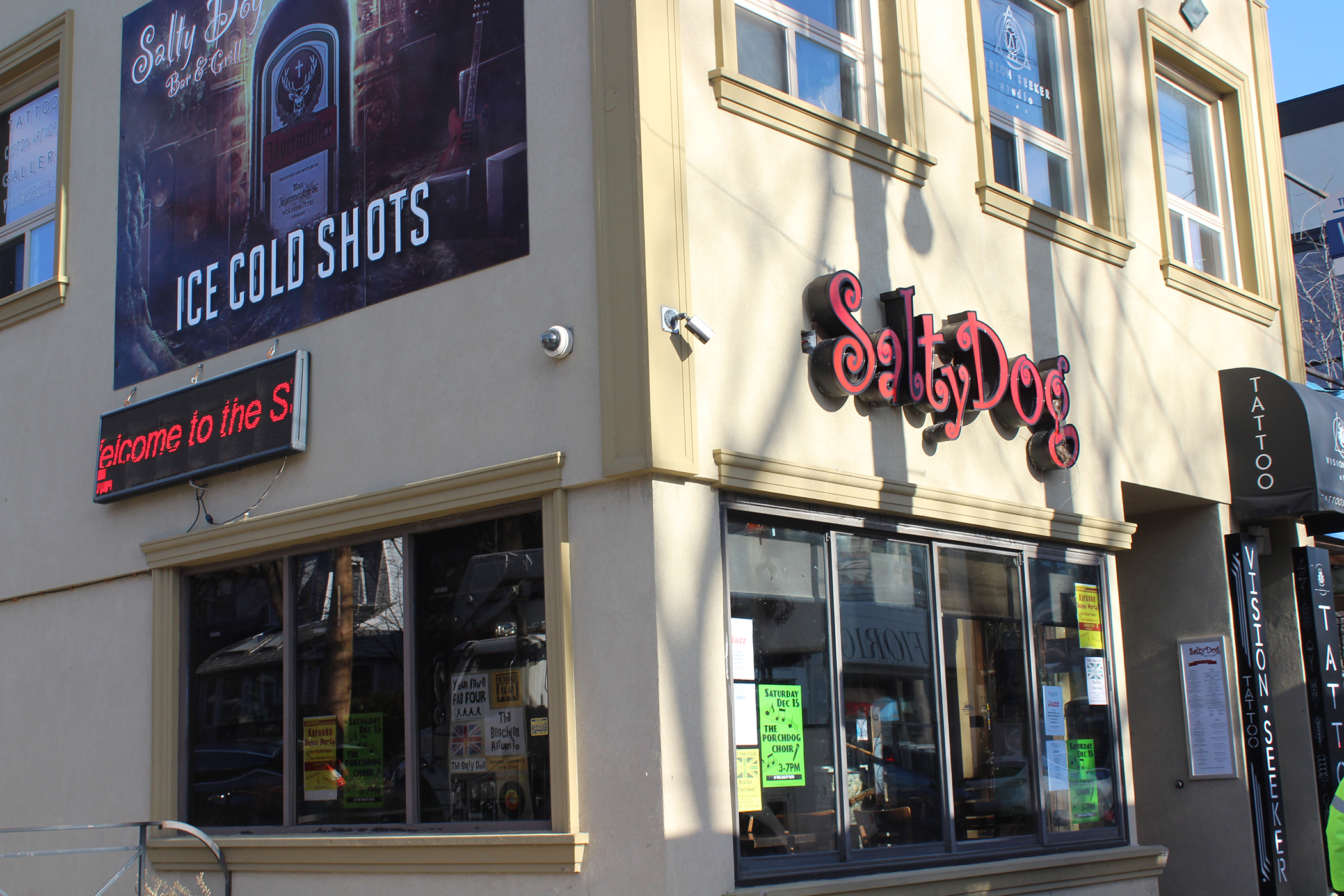 The Salty Dog Bar & Grill at Queen Street East and Waverley Road in the Beach will be closed as of March 1.

The live music scene in the Beach has taken a serious body blow with news that the Salty Dog Bar & Grill on Queen Street East will be closing as of March 1.

The pub at 1980 Queen St. E., at Waverley Road, first opened in the community in 2009 and soon became a popular location with live music fans.

The bar would host numerous music events and had jazz nights and blues nights as regular features for more than a decade.

“As the page boy whispered in the conqueror’s ear, ‘All glory is fleeting.’

“Yes indeed. ‘All good things must come to an end’ to coin another common bromide.

The Salty’s Dog’s last day of business will be Sunday, March 1, and there will be a farewell party starting after 6:30 p.m.

In a post on the Salty Dog’s Facebook page in response to the closure, Michael Sedgewick and Robin Hutchinson said the final edition of the popular Friday Night Blues Jam would take place on Feb. 28.

“I’m sure it will be a great party! To say I’m a little sad about it would be an understatement. However the owners have to do what is best for them and I know all of the challenges that they are faced with. It was the right time for them to move on,” wrote Sedgewick who along with Robin Hutchinson have been long-time organizers of the Friday Night Blues Jam.

He said that the Friday Night Blues Jam is not finished, but will have to move to a next phase with the Salty Dog’s closure.

“This is not the end of the Friday Night Blues Jam, merely a transition into the next phase of our unique event,” wrote Sedgewick.

“We are reminded every week how many people share the same ideals of what our jam was about. We built it from the ground up in a grass roots style. We just always wanted to have a jam that put the music first. And I think a lot of people found it refreshing to be able to play at a place where there were no egos or politics, just great music being made for the right reasons. The vibe that we cultivated was second to none and the hardest thing moving forward will be knowing that no matter how great the next thing will be, it will never match the vibe of a packed Salty Dog on any given Friday.”

Sedgewick’s post went on to thank all the live music fans in the community, and Salty Dog’s owners Larry and Danny for their support.

I want to thank all of the fans of live music who made Friday a weekly event and helped us grow by always bringing new fans of blues. I want to thank all of the jammers who came out one time, or a hundred times. I won’t name any here but you all know who you are. I know that we have had easily hundreds of different players come by and hang with us since the inception. With Juno winners, Maple Blues winners, Grammy nominees, Canadian Rock royalty, and future stars often in attendance. Wow.

“I want to thank the owners of the Salty Dog, Larry and Danny, for allowing us to get loud (sometimes) and generally trusting Robin and I to do things the way that we thought was best. The servers Kristen, Maureen, Mike, and especially Tina. Tina brought an energy and enthusiasm to the jam that truly added to the vibe. It was a family there. And with family there can be rocky moments, but we were all committed to working out whatever issues came up and kept moving forward. We will also miss the Tuesday night jazz, and the great bands that play weekend matinees as well.”

Other reactions to closure on Facebook included a post from Beach band The Two Fours thanking owners Larry and Danny for their support of live music in the community. “We’ll miss you in the neighbourhood,” said the post.

Kevin Ellis posted: “Your Tuesday Nigh Jazz nights were amazing opportunities to see some of the best musicians in the country. Sad to see the place go. So many changes on the street lately.”

The announcement of the Salty Dog’s closure comes on the heels of the closing of the Big Bruce Public House at 1963 Queen St. E. earlier this month.