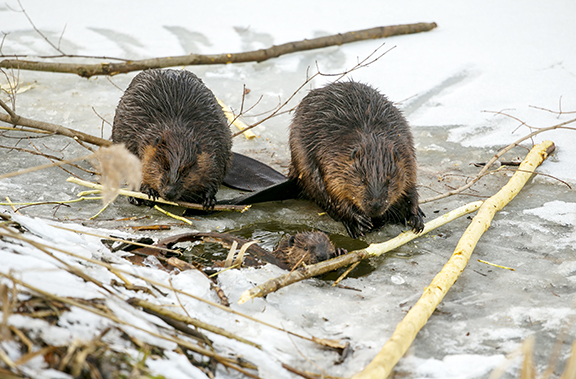 A family of local beavers at work on a partially frozen river. Photo by Ann Brokelman.

What a winter this one has been! One day it felt like -20 with the wind chill and the next I’m driving with the windows down . I’ve certainly taken advantage of the warmer days to get out more often and observe some local animals’ winter behaviour.

A few weeks ago I found a family of beavers at a local park and I’ve been obsessed with them ever since.

I’ve learned so much about them, with special thanks to my friend Mike C. who answered many of my questions, that I had to write this article to share the experience.

This story begins when my friend Mel and I had gone out to a local park to try out her new camera and lens.

I was hoping to see something big, like a deer, but just a few minutes into our walk we saw something sitting on the nearby iced-over river. It didn’t take long to realize it was a beaver (the tree he had dragged across the ice and was chewing on was a bit of a giveaway).

While we were watching, he tired of his current branch, lumbered off the ice, and proceeded to chew on a nearby tree.

He got up on his hind legs and after just a few minutes he had taken down a branch that must have been a couple inches thick.

It actually took more effort on his part to pull the branch back to the river, as it kept getting stuck on other trees and shrubs, but he was determined to get it close to the hole in the ice.

To our pleasant surprise, once he got the branch near the edge of the water, another beaver popped out and helped him pull the whole branch under the water.

It wasn’t long before more branches were brought onto the ice, and then two young beavers (kits) popped out and joined the adults!

I’ve been back to watch these beavers a few times and have seen other neat behaviours.

One time, I saw the male making a mound of weeds, mud, and sticks along the side of the river. I was told that this is either a stud pile, which is part of their mating ritual, or could also be part of a territorial marking.

Another time I watched one of the adults actually breaking through the ice with his head, from under the water, to open the hole for them to come out.

Most of us know that beavers eat bark, but I had no idea until recently that they have orange teeth (because of how much iron is in them).

They live in lodges that are made of the tree parts they didn’t eat, as well as mud and weeds.

Their family can live in the lodge over the entire winter, if they can’t break through the river ice, by surviving on the tree branches stuck in the mud of the lodge.

Thanks to this weird weather, I saw a firsthand snapshot at the life of beavers.