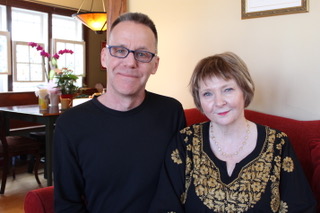 For Beach area residents Mike Erskine-Kellie and Susan McLennan have written the children's book I Got You A Present! which is slated to be released by Kids Can Press in April. Photo: Submitted.

Do you believe in fate? After a chance meeting more than 20 years ago would set into motion more than just sparks.

For Beach area residents Mike Erskine-Kellie and Susan McLennan, what started off as just another script landing on a desk would grow into partnership neither would have expected at the time. Their chance meeting would turn into a seven-hour date with no regrets and neither looking back.

Although Erskine-Kellie and McLennan have worked in television and have been published in a variety of other mediums, working together professionally has always worked well for the two who also share the same goals and aspirations. For the married couple and now co-authors, writing a children’s book was a project they always wanted to strike off their bucket list.

“We sat down a few years ago and thought what dreams do we want to tackle next? And this was kind of the big one. We had written for television and had the admiration from our peers, but this was one thing that was left unfulfilled. It was Mike’s big dream, so it was really important to bring his dream and story to life” said McLennan.

For Erskine-Kellie, he fondly remembers his childhood home where books were everything. His mother was a nursery school teacher who would read to children with such dramatic flair and intensity that it turned each story into a performance.

“I was fascinated by mother’s whole process even back then, and writing a book was something I always wanted to do. I have always enjoyed trying to make people happy, and to me, kids’ books have always been a great way to do that,” he said.

Published through Kids Can Press, I Got You A Present!, chronicles the adventures of a duck who wants to be your best friend. The only thing that matters to the duck is that he finds you the best present for your birthday. As with every great children’s story, there is always an important message for the reader.

“The book is really all about personal resilience. In this business you can constantly face rejection. It’s something both Susan and I have encountered and we wanted to incorporate that theme into the book,” Erskine-Kellie said.

Beyond the story itself, the importance of having a well-thought out main character is an essential part of creating a book that children will enjoy and relate to. For Erskine-Kellie and McLennan, the choice was always a relatively easy one.

“When we were writing the book, we wanted the character to be essentially genderless, so we came back to having some kind of animal. We went through a whole myriad of ideas, but we started calling the character Ducky. We didn’t mention this to illustrator because we believed he or she deserved their own creative freedom. But we had always determined initially that the main character should be a duck and our illustrator had the same idea. It was great surprise.” she said.

The working process behind publishing a book is most often a tremendous undertaking. From finding the right literary agent and publisher to creating the right characters and finding the appropriate audience for the book. For the co-authors, having a fantastic team behind them has made the entire process a great experience.

“The joy of a good publisher is that they really care about the idea and how kids will respond to it. Kids Can Press is an awarding winning publisher for children because they care about what kids want. What mattered to them essentially mattered to us. Giving kids an experience that means something,” said McLennan.

Erskine-Kellie and McLennan’s I Got You A Present!, is set to be released on April 7, and will be available at book sellers everywhere. The book will also be available for purchase online through Amazon.